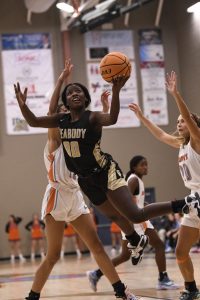 Peabody’s Myricle Johnson (00) goes up for a layup against South Gibson during a high school girls basketball game at South Gibson on Nov. 15, 2022.

With Week 1 in the books, multiple area teams are off to a hot start in the area, and I am 5-0 in my picks for the top five games involving Gibson County area teams.

So here is to another week of success mixed in with lots of turkey and dressing.

Check out the top games in Week 2:

Peabody (1-1) at Dresden (2-0) Girls (6 p.m., Monday): This is a rematch of last year’s Region 7-1A semifinal that Dresden won on the way to reaching the 1A state semifinals. Peabody is coming off a dominant performance against 3A Henry County.

Humboldt (0-0) at Gibson County (2-0) Boys (6 p.m., Monday): Humboldt kicks off the season against a team that played twice last week. The Vikings are looking to rebound from last season when they missed the region tournament.

South Gibson (2-0) at Chester County (0-2) Boys (7:15 p.m., Monday): The Hornets picked up an overtime win over an athletic Ripley team with a strong defensive effort. Another solid defensive effort will be needed to knock off the Eagles

South Side (2-0) at Gibson County (2-1) (4 p.m., Friday): Dealing with the Lady Hawks’ athleticism is tough for any team. Gibson County has done it with a strong defensive performance in recent years, but South Side reached the 3A title game last season

Bradford (1-1) at Milan (0-0) Boys (5:15 p.m., Friday): While the Bulldogs’ season starts on Monday, this could be the first time that the football players could play for Milan. Either way, the Bulldogs will want to knock off a county rival.