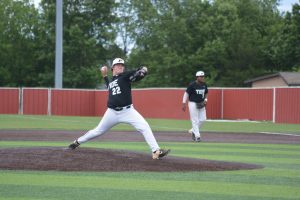 Peabody’s Eli Girard (22) pitches against McKenzie in the Class 1A high school baseball state tournament at Riverdale on May 27, 2022.

Wednesday (Day 3) was full of rainouts and postponements. Tennis and soccer were the only sports that were able to play.

But area baseball teams picked back up on Thursday (Day 4) with Bradford, South Gibson and Peabody secure top-four finishes in the state tournament.

DAY 1: How did Gibson County area athletes perform on Day 1 of Spring Fling?

DAY 2: How did Gibson County area athletes perform on Day 2 of Spring Fling?

After two days of rest due to unplayable fields and rain, Peabody got back on the field Friday and was ready to go.

The Golden Tide beat McKenzie 2-1 to advance to the Class 1A semifinals.

Peabody will play McKenzie at 10 a.m. on Saturday, and the Golden Tide would have to be beaten twice to be eliminated.

In the first inning, Garrett Webber scored on an error, and in the fourth inning, Eli Girard hit an RBI single.

Girard improved to 7-3 on the season as he allowed one run on seven hits with four strikeouts in 114 pitches.

Bradford finishes in top-4 of Class A

Making the Class 1A state tournament for the first time, there weren’t any expectations on the Bradford baseball team.

In the first inning, Cole Cates hit a two-RBI triple and then scored on a balk. In the second inning, it was an RBI single by Cason Sharp and Cates being hit by a pitch with the bases loaded for the 5-1 lead.

In the fourth inning, Cates hit a sacrifice fly and Sharp scored on a run down.

Sharp led off the scoring against Eagleville with his sixth home run of the season, but that was the only run the Red Devils scored.

The Hornets scattered three hits and couldn’t get any runs across as Upperman beat South Gibson 7-0 for the second time in the Class 3A state tournament.

Upperman scored three runs in the first inning to set the tone, and the Hornets struggled to get back in the game.

Trailing 4-0 in the quarterfinals of boys doubles tennis, it looked like Milan’s Hunter Lawson and Carson Pruitt would have a short stay in the Class A state tournament.

But Lawson and Pruitt were ready to prove doubters wrong.

The Bulldog duo fought back to win the quarterfinals 9-7 over Watertown’s Ian Fryer and Jackson Thomas. In the semifinals, Lawson and Pruitt pushed Signal Mountain’s Drew Morris and Nathan Morris before falling 8-6.