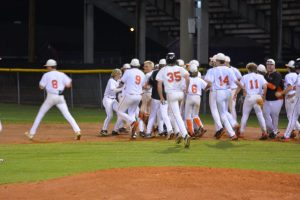 South Gibson celebrates after a walk-off victory over Sullivan East 9-8 at Smyrna High School on May 25, 2022.

Day 2 of Spring Fling was full of rain delays, but it also included some big wins for Gibson County area teams. Here is what happened:

DAY 1: How did Gibson County area athletes perform on Day 1 of Spring Fling?

After losing earlier in the day in extra inning and sitting through a 90-minute rain delay, South Gibson put it together in the sixth and seventh innings to come from behind to beat Sullivan East 9-8 in the Class 3A state tournament.

In the bottom of the seventh inning trailing by two runs, Bryson Robbins hit a fly ball to left field, which allowed Dawson Ellis to score on an error to cut the Sullivan East lead to 8-7.

Connell Hardin tied the game on an RBI single to right field. Turner Murchison hit a hard groundball to the shortstop, and Hardin scored on an error on the throw to second base.

Joseph Alford improved to 3-0 on the season as he allowed on run on one hit with two strikeouts over 1.1 innings.

Robbins went 1-for-5 with three RBI and two runs, while Jack Brafa went 2-for-5 with two RBI.

Earlier in the day, Upperman beat South Gibson 6-5 as the Bees hit a solo home run in the top of the eighth inning.

The Hornets scored four runs in the second inning before Upperman scored five in the third inning to take the lead back.

Alford scored on a wild pitch to tie the game in the eighth inning.

The Red Devils (18-20) play Coalfield at 10 a.m. on Thursday at Eagleville. A win would put them in the top four Class 1A teams in the state.

Bradford scored one run in the first and then added five in the fourth to win the game.

For three innings, Peabody kept Gordonsville on its heels, but in the fourth inning, the game started opening up for Gordonsville for the 18-7 victory.

The loss eliminated Peabody (10-20) from the Class 1A state tournament.

But four runs in the fifth inning and six runs in the sixth inning allowed Gordonsville to open up the game. Ann Taylor Elliott and Briana Jordan drove in two runs each.