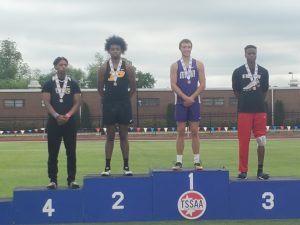 Milan’s Andy Westbrooks stands atop the podium after winning the Class A state championship in the high jump on May 24, 2022.

The TSSAA Spring Fling kicked off on Tuesday as state champions in baseball, boys soccer, softball, tennis and track & field will be won this week.

Here is what happened on Tuesday involving Gibson County area teams on Day 1:

The Hornets’ bats stayed hot into the Class 3A state tournament opener as they scored six runs in the first inning to cruise to a win in five innings.

Six of the first seven South Gibson batters picked up a hit as the Hornets raced out to a 6-0 lead midway through the first inning.

The combination of Bryson Robbins and Jack Brafa were dominant on the mound. Robbins improved to 4-0 on the season as he allowed two earned runs on four hits with one strikeout in three innings. Brafa returned to the mound for the first time this season, giving up one hit over two innings with four strikeouts.

Junior Owen Lee improved to 4-1 on the season as he pitched a two-hit shutout with five strikeouts and two walks in a complete game to lead Peabody to a 4-0 victory over Gordonsville.

London Burkett set the tone in the first inning with a two-RBI double for the 2-0 lead.

In the fourth inning, Peabody added a third run on a Sid Hammonds sacrifice fly. In the fifth inning, Orlandis Ivory hit an RBI single for the final run.

When Cole Cates was on the mound, Bradford kept the game against Class 1A favorite Eagleville close. But when Cates came off the mound, Eagleville scored seven runs to beat the Red Devils 11-0.

Cates allowed three earned runs (four total runs) on seven hits with seven strikeouts through six inning when he was taken off the mound after 105 pitches.

A seven-run seventh inning ended the game though. Bradford had a total of three hits with nine runners left on base.

For the first time since 1981, Milan has a state champion in boys track. Milan junior Andy Westbrooks cleared 6-feet, 8-inches to win the Class A state championship in the high jump. He also jumped a distance of 21-feet to finish third in the long jump.

Westbrooks cleared 6-feet, 4-inches to win the state title and went on to clear 6-feet, 6-inches and 6-feet, 8-inches to pull away.

He jumped a distance 21-feet on his first of four attempts, and that was good enough to finish in third place

Peabody junior Derek Kee has battled Andy Wesbrooks all season at meets in West Tennessee. Well, the state meet was no difference as he cleared 6-feet, 2-inches to finishes as the state runner-up to Westbrooks.

He also jumped 20-feet in the long jump to finish in fifth place.

South Gibson freshman Faith Reed has made an immediate impact on the Class AA state meet. Reed ran the 300-meter hurdles in 48.76 to finish as the stat runner-up. She finished behind Volunteer’s Emily Christian with a time of 47.53.

Coming into the Class 1A state tournament, Peabody knew that picking up a win would be tough to come by, and Oliver Springs scored 22 runs to give the Lady Tide the loss.

Oliver Springs scored 11 runs in the first three innings to take an 11-0 lead and doubled it with 11 more runs in the top of the fourth.

South Gibson ends the season at 15-4.

The Hornets made some opportunities early, but Page took a 1-0 lead in the 33rd minute. Page added a second goal 26 seconds before halftime for the 2-0 lead.

The Patriots scored twice in the second half in a two-minute time period to clinch the win.