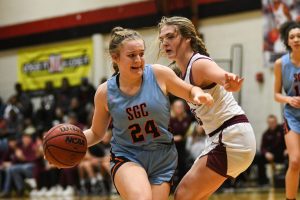 South Gibson’s Hallie Allen (24) drives to the basket against Hardin County in the Region 6-2A semifinals at South Side on Feb. 28, 2022.

A new high school basketball season for 2022-23 means more games for Michael Odom to try his luck at pick’em.

Check out the top games in Week 1:

Peabody at South Gibson Girls (6 p.m., Tuesday): A good test for both teams in the season opener. Peabody ended the season strong after a slow start due to inexperience. Both played in the region semifinals.

Peabody at South Gibson Boys (7:15 p.m., Tuesday): The Golden Tide will be going through some rebuilding this year as they return one starter from last year’s squad that played for the Class 1A state championship. South Gibson also lost three key players from last year’s team, so this will be a chance to see the new chemistry on the court.

Chester County at Gibson County Boys (7:15 p.m., Thursday): Coming into the season, the PIoneers have high expectations for the first time in a while. How will this team handle those expectations when playing a larger school?

South Gibson at Ripley (7:15 p.m., Friday): The Hornets will see their first road test against a team that made a run to the Class 3A sectionals last year. Will the South Gibson shooters find their shot on the road?

Lexington at West Carroll Boys (7:15 p.m., Saturday): The War Eagles will face their old coach in Jason Fitch, who took the job at Lexington prior to the 2021-22 season. West Carroll will have a new look on the court as Jalen Anglin has graduated along with other key starters.