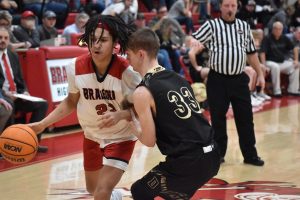 With the 2022-23 high school basketball season beginning next week, here are some players to watch this season.

PICK’EM: See who Parkins and Odom picked in the second round

There are five top returning players and seven players primed to have breakout seasons.

Bryce Arnold (Bradford, Guard, Sr.) – Arnold was a key component in the Red Devils winning the District 13-A championship last season and reaching the Region 7-1A semifinals. He averaged 11.2 points and 6.3 rebounds, while shooting 54.2 percent from the field.

Derek Kee (Peabody, Forward, Sr.) – Kee returns with the most experience in the starting lineup as the Golden Tide reached the Class 1A title game last season. He averaged 13.1 points, 8.7 rebounds and 5.4 blocks per game.

Camden Lockett (South Gibson, Guard, Sr.) – Lockett is the top returner for the Hornets, which reached the Region 6-3A semifinals last season. He averaged 9.5 points, four rebounds, three assists and two steals a game, while shooting 82 percent from the free throw line.

Matthew Reynolds (Gibson County, Guard, Sr.) – Reynolds was a ball-handler and shooter for the Pioneers last season as they reached the Class 2A sectionals. He averaged 15.4 points and 5.5 rebounds, while shooting 82 percent from the free throw line.

Ethan Turner (Gibson County, Post, Sr.) – Turner has the potential to be one of the best players in West Tennessee this season. He averaged a double-double last year with 17.5 points and 11.8 rebounds. He shot 75 percent from the free throw line.

Primed to break out

JaQuan Adkins (West Carroll, Guard, Sr.) – Adkins is the lone returning starter for the War Eagles that made the Class A state quarterfinals each of the past two seasons. He will handle the ball and set up the offense. Last season, he averaged 10.8 points, 3.2 rebounds, 2.2 assists and 1.6 steals.

Adam Arnold (Milan, Guard, Sr.) – With the graduation of Jodarius Robinson, Arnold will be called upon to handle the ball more and to use his outside shot to open up the paint. In last year’s run to the Class 2A state title game, Arnold averaged five points, 1.3 assists and 1.7 rebounds, while shooting 36 percent from 3-point range.

Ashton England (South Gibson, Wing, Sr.) – England gained more minutes last season as it went along. He will be looked to as a scorer this season after the graduation of three starters. Last season he averaged five points and five rebounds, while shooting 62 percent from the field.

Ryland Giles (South Gibson, Guard, Sr.) – Giles will step right into a starting role as the Hornets lost three starters to graduation. He will need to shoot the ball more and be called upon to handle the ball more. Last season, he averaged five points, while shooting 42 percent from 3-point range and 80 percent from the free throw line.

Stephon Shivers (Humboldt, Post, So.) – After a strong freshman campaign in the post, Shivers has gotten stronger, and he will be a go-to player for the Vikings. Last season, he averaged 10.0 points and 5.6 rebounds.

Jayden Street (Bradford, Guard, Sr.) – Street will be called upon more in multiple facets of the game. He can handle the ball, drive to the basket and shoot from the outside. With Cameron Oglesby now graduated, Street will need to fill in his spot. Last season, he averaged 9.9 points and 5.8 rebounds.

Andy Westbrooks (Milan, Guard, Sr.) – Westbrooks will be given more minutes this year. He became a leader on the football team with his move to quarterback, and he can jump out of the gym, as he is the Class A high jump champion. Last season, he averaged 5.2 points, 2.4 rebounds and 1.0 assists, while shooting 29 percent from 3-point range.