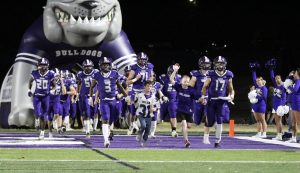 Milan’s Mekhi Carr (3) and Andy Westbrooks (17) leads the team out of the Bulldogs before they played against Ridgeway during the Class 4A high school football first round game at Johnnie Hale Stadium on Nov. 4, 2022.

Well, Michael Odom’s lead over Victor Parkins is now down to one game. Parkins correctly picked Obion County beating Melrose, which Odom did not.

So here is what is happening in the second round of the playoffs in Gibson County and across West Tennessee:

With Obion County upsetting Melrose, Milan now gets to host a second round playoff game against a team the Bulldogs beat 28-6 on the road.

For the second year in a row, the Hornets are forced to travel to Brownsville to keep its playoff hopes alive, but this year is a week earlier in the second round.

Whether Sam Driggers is ready to go or not, the Golden Tide will be favored for a return trip to the quarterfinals as Jerry Donald is a capable replacement.