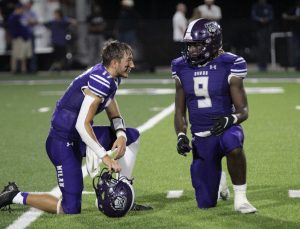 Milan’s Andy Westbrooks (17) and Carmelo Jones (9) kneel during an injury as the Bulldogs played Haywood during a Week 5 high school football game.

Week 5 had lots of blowouts in Gibson County; some good and some bad for area teams. But Week 6 has some good rivalry games.

After Week 5, Michael Odom has taken a five-game lead. Odom went 13-2, while Victor Parkins went 12-3, with Odom picking Haywood’s win over Milan as the difference.

RANKINGS: Covington moves up to No. 4 in West Tennessee rankings after Week 5

So here is what is happening in Week 6 in Gibson County and across West Tennessee:

Bad loss. Time to bounce back in one of the oldest rivalries in West Tennessee. Huntingdon embarrassed the Bulldogs last year, but that shouldn’t happen this year.

Time to test the South Gibson pass defense as NCAA Division I recruit Ryan Damron comes to Medina to try for a second straight win.

The Golden Tide goes up two classes to play the Trojans on the road. The key will be staying healthy as more region games are on the horizon.

Gibson County is needing a good defensive showing, but that will be tough against a quick Lake County team that has played a tough schedule thus far.

One loss combined between these two teams, but this one won’t be close as McKenzie is firing on all cylinders with sights on the Class 1A title game.

Lausanne has one of the top-rated quarterbacks in the state, and he is committed to Ohio State.

Liberty at North Side

South Side at Westview