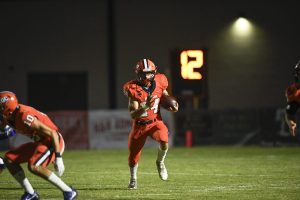 South Gibson’s Devin Harris (24) runs the ball up the field against Kirby during a Week 4 high school football game at South Gibson on Sept. 9, 2022.

Two Gibson County area team came up with big region wins, while the other four teams lost. Peabody picked up a Region 7-1A win over Greenfield, while South Gibson picked up its first Region 7-4A win of the season over North Side.

The Hornets’ offense accounted for 341 total yards as they scored six touchdowns to force a running clock in the fourth quarter to pick up the first region win of the season.

A Ty Duncan interception helped set up a two-yard touchdown run by Austin Friend for the 7-0 lead on North Side with 9:11 to play in the first quarter.

After a Cody Lents fumble recovery, Friend scored his second touchdown of the night from three yards out for the 21-0 lead that lasted through halftime.

North Side answered in the third quarter on a 54-yard touchdown pass for the team’s first points of the season, but the touchdown came on a double-forward pass  that was not flagged. The running back ran in front of the quarterback and took a toss before looking up-field for an open receiver.

But South Gibson answered right back as Devin Harris scored from 14 yards out with 4:13 left in the third quarter for the 28-6 lead.

Howe threw a 25-yard touchdown pass to Cameron Clark with 3:38 remaining in the third quarter for the 35-6 lead.

South Gibson scored once more as Jaydon Reed scored from one yard out with 10:20 to play for force the running lock.

Reed finished with 111 yards rushing on 16 carries, while Harris had 46 yard rushing and Friend had 40 yards running. Howe completed 7-of-14 passes for 85 yards and ran for 51 yards on 11 carries.

Take away the touchdown pass, and South Gibson held North Side to 60 yards of offense.

The Golden Tide scored six touchdowns in the first half to cruise to a Region 7-1A victory over Greenfield.

The Golden Tide came out hot from the start as Kylen Wade ran the opening kickoff back for a touchdown and the 7-0 lead.

After a Davais Gentry interception, Sam Driggers hit Garrett Webber for a 45-yard touchdown pass and 14-0 lead with 11:22 remaining in the first quarter.

But the Golden Tide went back to the Driggers-to-Webber connection for a 75-yard touchdown pass and 28-6 lead with 1:18 left in the first quarter.

And then with 7:07 remaining until halftime, Driggers hit Webber again for a 68-yard touchdown pass and 35-6 lead.

Driggers then got Derek Kee involved in the scoring with a 27-yard touchdown pass with 31 seconds until halftime. Peabody led 42-6.

Peabody scored once more in the second half for the 48-6 win.

Driggers completed 8-of-10 passes for 271 yards, while Webber had 207 receiving yards on five receptions and Kee had two receptions for 47 yards.

For the first time this season, the War Eagles lost, and it came in a Region 7-1A contest against Halls.

With 27 second remaining in the first quarter, Halls scored on a 54-yard touchdown pass.

West Carroll answered in the second quarter as Jay Long went 45 yards for the touchdown to tie the game 7-7 with 6:09 until halftime.

But Halls had answer of its own with a 22-yard touchdown run with 58 seconds remaining to take a 14-7 lead.

Halls added another in the third quarter as Halls returned a pick-six 26 yards for a touchdown and the 21-7 lead.

The War Eagles answered with 50 seconds to play on a five-yard touchdown run by Jayden Milton.

A matchup between two of the top three teams atop the Region 7-4A standings ended up being a one-sided affair.

A 68-yard touchdown pass from Andy Westbrooks to Mekhi Carr cut the Haywood lead to 14-7 late in the first quarter.

But the Tomcats scored 41 unanswered points to stay unbeaten in Region 7-4A play.

Milan’s second touchdown came in the final four minutes of the game.

The Pioneers struggled once again in Region 7-2A action, giving up 89 points in a pair of region matchups.

Gibson County gave up seven straight touchdowns before Aiden Webb scored from 13 yards out with 5:08 left in the third quarter. Union City led 49-6.

The Vikings dropped their second straight Region 7-1A contest of the year to Lake County.