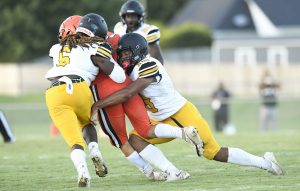 Peabody’s Jacoby Albea (6) and Josh Jones (18) makes a tackle against South Gibson during a high school football jamboree at South Gibson on Aug. 12, 2022.

With the 2022 high school football almost upon us, Michael Odom and Victor Parkins are ready to battle it out again in a little pick’em challenge.

So here is what is happening in Week 1 in West Tennessee:

Both teams have some top-level skill players, so a big determining factor in this game will be the offensive line. Peabody returns four, while Milan returns one. Peabody has won five straight in this series.

The Ben Johnson era begins for the Hornets with a road trip. Lexington has one of the best running backs in West Tennessee in Isiah McClaine, and he will be a focus of the defense.

Charles Rogers has taken over the Pioneers, and he will try to open his time with the program with a victory. Obion County won by 14 points last season.

Last season, Humboldt kept this game close until the end. Can the Vikings get the upperhand early in Teddy Pettigrew’s second season in charge.

A win here sparked a 5-0 start for the War Eagles as they beat a county rival by six points. A win here would be a big confidence boost for first-year quarterback Jaxon Mims.

North Side at Hardin County

South Side at Ripley

Westview vs. Dresden at UTM