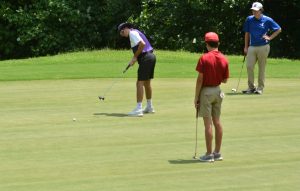 Milan’s Taylor Hill putts at Chickasaw Golf Course on Aug. 1, 2022 in his first match back since losing his left eye.

Many times along the way it would have been easy for Milan senior Taylor Hill to say that he had enough and sports during his senior year wouldn’t happen.

I mean wouldn’t you if you had been hit in the eye by a golf ball in early June, had three eye surgeries in a six-week period and had to remove the left eye?

But Hill’s faith and resilience to get back on the golf course and baseball field were bigger than any injury.

In only 11 days following his eye removal surgery, Hill returned to play in Milan’s first golf tournament of the year on Aug. 1.

“It is the best feeling getting back after everything that I have been through,” Hill said. “To finally be back and have a real chance of returning to action.”

And that is the optimism that Hill has had from the moment that the injury happened.

“Right after the injury, he started talking about his plans for next March and really be ready like he would be without the injury,” Milan baseball coach Greg Scott said. “His plans are to be behind the plate and in the lineup. If anyone can accomplish that, Taylor is the one that can do that. He is determined and a hard-working kid anyway. This gives him something to work on.”

On June 8, Hill was hit in the left eye by a golf ball from 15-20 yards out at Milan Golf and Country Club. He was driven back to the clubhouse and an ambulance took him to the hospital.

That evening he underwent his first surgery after a severe global rupture in his eye, a large orbital fracture and a deep cut along his brow.

“I went out to play a round,” Hill said. “I felt like I got punched in the eye. I fell down. I saw it coming, but it was so fast that I didn’t have a chance to react.

“It was hard to get through emotionally and physically after that first surgery with the amount of pain that I was in.”

All of Hill’s coaches from Milan took time to come and see him at the hospital the first night or the following day.

“As a team and community, we are big in faith, so we went into prayer,” Milan golf coach Luke Williams said. “We wanted him surrounded by the people that he is around all of the time. Make it more normal.”

After the initial surgery, Hill had two weeks before he was at the University of Alabama-Birmingham Callahan Eye Hospital for another consultation and surgery.

But on his way home on June 9 from the surgery at Jackson-Madison County General Hospital, he stopped in to see his Bulldog baseball teammates playing in a summer league game.

“That is where I wanted to be,” Hill said. “I wouldn’t want to spend my time anywhere else.”

But there was lots of pain for Hill also with the stitches in his eye and the healing process.

On June 22, he had his second eye surgery to check on his retina and put in a cornea transplant. The surgeon also told him that Hill would never see out of that eye again.

“The doctors told me that they never thought that I would ever get to play baseball or golf again,” Hill said. “They said depth perception would be too big of an issue. So it feels good to get out here and prove them wrong.”

Two days later, he was back on the golf course working on his chipping and proving to the rest of the world that this injury wasn’t going to keep him down.

“I didn’t think I would ever get to even practice again, especially after my second surgery when they told me that I would never see again.”

But in early July a tough decision was placed before Hill. He could leave the eye in and possibly deal with intermittent pain throughout his life and consistent doctor’s visits or he could have the eye removed and have prosthesis implanted.

“It took weeks of discussing and thinking it over,” Hill said. “I wanted to keep it in just for the possibility of seeing again. But the doctors told me I wouldn’t and the pain was bothersome. I relied on my friends and family. The support I had from just our community was ridiculous. People wanting to come and bring meals and asking how I was doing meant everything to me.”

So on July 21, Hill had a third surgery to remove the eye. One week later the stitches keeping his eye shut were removed and he was back in Milan that evening for “Meet the Bulldogs” at Johnnie Hale Stadium.

For Williams, there was never doubt of where Hill would be to start the 2022 golf season.

“I have played this over and over in my head,” Williams said. “There was never a doubt for me that he would be back.

He told me as much, and when he tells me he is going to do something, I believe it.”

On Aug. 1, Hill played in The Preview at Chickasaw Golf Course, and while he wasn’t happy with the 98 he shot in his first match back, this was the first step back to normalcy.

Hill’s senior year started on Aug. 3, and he is hoping to soon be back on the baseball field trying to improve and be ready for Milan’s 2023 season.

“It felt like the first time I was back to myself,” Hill said. “The pain is slowly going away. I can start living my life again.

“On Monday, I get released, so we will see how baseball goes. I will try and catch, but I have been playing outfield and that is going as good as I can ask.”