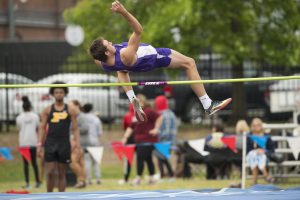 Milan’s Andy Westbrooks wins the high jump with a height of 6-feet, 8-inches at the Class A state high school track and field meet at Hayes Stadium on the campus of Middle Tennessee State University on May 24, 2022.

Wait, summer is half over?!

During the month of June, we looked back at the most memorable games, top coaching jobs, top teams and top players from the 2021-22 school year. The school year starts in a month, so now we will look forward to what fans across Gibson County should be excited about for the upcoming school year.

Up first is a look at the top 15 returning seniors for this school year:

1. Andy Westbrooks (Milan football, basketball, track): The 2021-22 All-Gibson County male athlete of the year has to be at the top of this list. Westbrooks is a three-sport athlete that has the ability to excel throughout the year. He returns as punter and kicker for the football team, while also taking as quarterback. He averaged 5.2 points and 2.4 rebounds for the basketball team that finished runner-up in Class 2A. And he won a state championship in track with a height of 6-feet, 8-inches in the high jump, while also taking bronze in the long jump.

2. London Burkett (Peabody football, baseball): Burkett is one of the top linebackers in West Tennessee as he helped the Golden Tide to the Class 1A semifinals. Last season, he recorded 75 total tackles with 11 tackles for loss, two sacks and a fumble recovery. On the baseball field, he helped the Golden Tide to a top-four finish as he batted .330 with eight doubles, two triples and 25 RBI.

3. Hank Fisher (Milan football, soccer, track): Fisher led the county in tackles last season as he recorded 71 total tackles with two tackles for loss and one sack. He also finished third in the discus throw in the Class A state meet with a distance of 125-feet, 3-inches.

5. Ethan Turner (Gibson County boys basketball, football): While Turner showed his strength on the football field to start the year, it is the basketball court where is the star. He helped the Pioneers to the Class 2A sectionals as he averaged 17.5 points and 11.8 rebounds.

7. Ella Piercey (South Gibson girls soccer): Piercey is looking to stay healthy this season after missing five games last year. She played a key role as the Lady Hornets reached the Class AA quarterfinals as she recorded 17 goals and 13 assists.

8. Carter Milligan (Milan baseball, cross country): Milligan was dominant on the mound last season as he went 5-1 in 53.2 innings pitched. He had a 1.57 ERA, 60 strikeouts and nine walks as the Bulldogs reached the Class 2A sectionals. He was also All-Gibson County in cross country as he ran the Region 7-AA race with a time of 20:41.43.

9. Isaiah Agnew (Humboldt football): Agnew was a leader defensively as he helped the Vikings reach the Class 1A second round. He had 62 total tackles with two tackles for loss and one sack.

10. Owen Lee (Peabody baseball): Lee was a key component of the Golden Tide’s run to the Class 1A state semifinals. He batted .380 with 12 doubles, 22 RBI, 37 runs and 17 stolen bases. He was limited in pitching as he recovered from an arm injury but finished the year 4-2 with 34 strikeouts, including a 1-1 record at the state tournament.

11. Mary Ellen Montgomery (Milan volleyball, softball): Montgomery was a finalist for the 2021-22 All-Gibson County female athlete of the year. She is a middle hitter on the volleyball team as the program broke the record for wins in a season. She recorded 205 kills, 52 blocks, 49 aces and 45 digs. She is also a dominant pitcher and hitter on the softball team that finished third in District 12-2A. She won eight games this season and recorded 116 strikeouts in the circle. She also batted .410 with four home runs.

12. Sam Driggers (Peabody football): Driggers has two losses during his entire career. He helped the Golden Tide to the Class 1A semifinals last year as he threw for 1,240 yards and 16 touchdowns with five interceptions. He completed 57 percent of his passes. He also rushed for five touchdowns.

13. Mekhi Carr (Milan football): Carr returns to try and be a leader in the backfield for the Bulldogs. He rushed for 1,048 yards and 14 touchdowns on 128 carries, and he is known for using his speed to get up the field.

14. Louis Cianciolo (South Gibson boys cross country, basketball): Cianciolo fell one spot short of reaching the Class AA state tournament last season. He finished 12th in the region with a time of 18:03.39. He will also take on a bigger role on the basketball team with his ball handling abilities.

15. Colton Lumpkin (Gibson County football): Lumpkin was a leader in the Pioneers’ backfield as he rushed for over 800 yards and 16 touchdowns. He averaged over eight yards per carry.