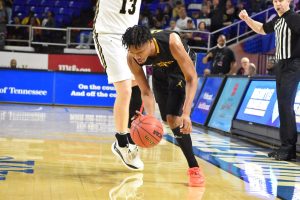 Peabody’s DeMarkus Kee drives to the basket against Clay County in the Class 1A high school boys basketball state semifinals at the Murphy Center.

What a year for athletics in Gibson County! Multiple teams played in the state tournament with a few making runs to the state title game.

Here are the top 15 most memorable games involving Gibson County area teams through the 2021-22 school year:

1. Peabody boys basketball beats Clay County in Class 1A semifinals: Coming into the game, Clay County was the defending state champions with the 2021 and ’22 Mr. Basketball winner in Grant Strong. But the Golden Tide’s defense held Strong to 19 points on 6-of-21 shooting from the field for the 51-43 victory. Junior Derek Kee scored 16 points to lead the Golden Tide, while Jason Hunt added 13 points and DeMarkus Kee finished with 11 points. Clay County didn’t take the lead in the final three quarters.

2. Milan boys basketball beat Tyner in Class 1A semifinals: With a 59-41 win over Tyner, Milan advanced to the state championship game for the first time since 1942. The Bulldogs opened the second half on a 15-0 run and held Tyner to three points in the third quarter. Jodarius Robinson scored 14 points to lead the Bulldogs, while Carson Pruitt added 10 points.

3. South Gibson football knocks off Milan in Week 3: With 14 seconds remaining, South Gibson’s Ty Schrotberger scored from one yard out as the Hornets retook the lead to beat Milan 44-41 in the Region 7-4A opener for both teams. There were three touchdowns scored in the final 2:26. Hayden Sullivan connected with Kam Tharpe for a 12-yard touchdown, and after an onside kick, the two connected again on a 57-yard touchdown pass to give Milan the 41-37 lead with 1:26 to play.

4. South Gibson baseball beats Sullivan East in comeback win: With Connell Hardin’s RBI single to tie the game and run scored on error, the Hornets came back from a three-run deficit to knock off Sullivan East 9-8 to reach the Class 3A semifinals.
Entering the sixth inning, South Gibson trailed 7-4. The Hornets loaded the bases with no outs before the game went into a 90-minute rain delay. But three runs in the seventh finished the comeback.

6. Peabody football beats Westview in Week 2: Trailing by one point with 1:42 to play, Peabody went on a 71-yard drive capped off with an 18-yard field goal by Chase Minton for the 31-29 win. It was a 39th straight victory for the Golden Tide. Khalik Ganaway had a nine-yard run to the one-yard line with two seconds remaining to set up the final field goal. Ganaway rushed for 213 yards and two touchdowns.

7. Milan boys basketball beats Westview for District 12-2A title: For the first time in 18 years the Bulldogs won a district championship with a 49-46 victory over Westview. The Bulldogs hit three free throws in the final 23.3 seconds and Easton Yates grabbed a big rebound off a missed free throw for the win. Jodarius Robinson scored 22 points.

8. Peabody baseball beats McKenzie to reach 1A semifinals: After two days off during the Class 1A state tournament, the Golden Tide played a solid defensive game led by the pitching of Eli Girard to beat McKenzie 2-1 and advance to the state semifinals. Girard gave up one earned run on seven hits with four strikeouts in a complete-game win.

9. South Gibson girls soccer wins district title in overtime over Dyersburg: For the sixth straight season, South Gibson won the District 14-AA championship. The Lady Hornets beat Dyersburg 4-3 in overtime to win the title. With under one minute remaining in the second 10-minute overtime period, Kayla Peterson’s penalty kick was saved, but she followed her shot and scored for the win.

10. Peabody boys basketball beat MASE in Class 1A sectionals: Even with two starters out, the Golden Tide battled on the road in Memphis to advance to the Class 1A state tournament.
Peabody beat Memphis Academy of Science and Engineering 52-44 in overtime. DeMarkus Kee led the Golden Tide with 18 points, while Derek Kee added 15 points.

11. Milan baseball beats Westview for District 12-2A crown: For the first time since 2017, the Bulldogs won a district championship, and they had to come from behind to win it.
Entering the bottom of the sixth inning, Milan trailed 4-3. A Hudson Hooker two-RBI triple helped Milan take the lead and win.

12. Humboldt football beats Greenfield in Week 7: After not scoring a point in the first three quarters, Humboldt scored 22 points in the fourth quarter to pick up a 22-21 victory over Greenfield. With 1:37 remaining, Greenfield scored to take a 21-14 lead. But Kylan Johnson returned the kickoff 75 yards for a touchdown to cut Greenfield’s lead to 21-20. On the two-point conversion, Johnson connected with Casey Curry on a pass with 1:26 left.

13. Milan boys basketball beats Fairview in Class 2A sectionals: For the first time in 54 years, Milan advanced to the Class 2A state tournament with a 47-37 win over Fairview in sectionals. Gabe Scott scored a team-high 14 points, including some key 3-pointers in the first half.

14. Gibson County boys basketball falls in sectionals: The Pioneers reached the Class 2A sectionals after finishing runner-up in the Region 6-2A tournament. They went down to Summertown and held a 51-48 lead on a 3-pointer by Cole Lannom with under three seconds to pay. But Summertown’s Gavin Burleson nailed a half-court shot at the buzzer to force overtime. Summertown won 61-56 in overtime.

15. South Gibson football beat Lausanne in Week 10: Entering the game, Lausanne was unbeaten and ranked No. 3 in Division II-AA, allowing 5.8 points per game with four shutouts. South Gibson made two goal-line stands in the final seconds to secure the win. The Hornets won 17-14.