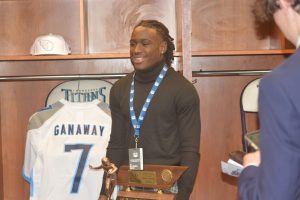 Peabody’s Khalik Ganaway poses with the 2021 Tennessee Titans Class 1A Mr. Football award and a Titans’ jersey with his name on it following the Mr. Football ceremony on Dec. 7, 2021.

Today, we finalize our look back at the 2021-22 high school sports season. We have looked at the most memorable games, top coaching jobs and top teams. We will now look at the top 14 high school athletes in the Gibson County area:

1. Khalik Ganaway (Peabody football, Sr.): Ganaway, a UT Martin signee, ended his high school career by winning back-to-back Mr. Football awards. As a senior, he rushed for 1,283 yards and 20 touchdowns on 9.9 yards per carry as he helped the Golden Tide to the Class 1A semifinals.

2. Andy Westbrooks (Milan track, Jr.): Westbrooks became the first Bulldog to win a track state championship since 1981. He won gold in the Class A high jump with a height of 6-feet, 8-inches – matching the highest height in the state this year.

4. Renato Gerena (South Gibson boys golf, Sr.): Gerena helped the Lady Hornets to a runner-up finish in the Class A state tournament. He shot a 145 (73-72) to finish fourth as an individual and finish the postseason with a 72.5 average.

5. Jodarius Robinson (Milan boys basketball, Sr.): Robinson helped lead the Bulldogs to the Class 2A state championship game for the first time since 1942. He averaged 14.3 points, 4.1 rebounds and 3.6 assists.

6. Anthony Brown (Milan football, Sr.): Brown, an Arkansas signee, had 4 total tackles with three tackles for loss as he shutdown the opposing team’s top receiver. He led the Bulldogs back to the Class 4A playoffs.

10. Xander Moon (West Carroll football, Sr.): Moon had 1,658 total yards of offense for the War Eagles as he led them to the Class 1A second round. He rushed for 1,131 yards with 23 touchdowns to go with 527 passing yards and five touchdowns.

12. Aubrey Colvin (South Gibson girls soccer, Fr.): Colvin was a scoring machine for the Lady Hornets as they made a fourth straight Class AA quarterfinal appearance as she finished with 35 goals and six assists.

13. Hallie Allen (South Gibson girls basketball, So.): Allen helped lead the Lady Hornets to the Region 6-3A semifinals as she averaged 13.5 points and six rebounds per game.

15. Hunter Lawson (Milan tennis, Sr.): Lawson played as the Bulldogs’ No. 1 singles player all season and combined with Carson Pruitt for the No. 1 doubles team. Lawson and Pruitt won the District 14-A and Region 7-A championships on the way to reaching the Class A doubles state semifinals.