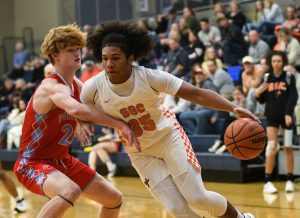 Snow. That one word sent last week’s schedule scrambling with Thursday and Friday’s games. But everything returned to normal on Saturday.
Teams will want to find a groove again, and the start of the district schedule is a good time for that to happen.
Michael Odom is now 21-11 (.656 percent) this season with his picks. He went 1-2 in Week 7.
Check out the top games in Week 8:

Gibson County (18-0) at McKenzie (12-1) Girls (6 p.m., Tuesday): That one loss on the McKenzie record was a 66-62 loss to the Lady Pioneers in mid-December. Winning at McKenzie will be tougher, and this one should come down to the play of senior Madison Hart in the post. If she can dominate in the post, Gibson County will be tough to stop. McKenzie’s Savannah Davis will be one of the best guards on the court.

Crockett County (11-3) at South Gibson (14-3) Girls (6 p.m., Tuesday): The Lady Cavaliers have won seven straight games since losing to the Hornets 50-45 in early December. South Gibson started the game well before allowing Crockett County back in the game late. The Lady Hornets are tough to beat at home, especially if Alana Seals and Hallie Allen get hot from 3-point range.

Lake County (6-1) at Peabody (10-5) Boys (7:15 p.m., Tuesday): A District 14-A opener for both of these teams. Lake County is coming off its biggest win of the season as the Falcons beat previously unbeaten Obion County. The key to this game will be Peabody’s defense making stops in the second half. The trio of Jason Hunt, DeMarkus Kee and Derek Kee can bring plenty of offense every night, but those three will have to defend well in this one.

Milan (7-5) at Union City (5-11) Boys (7:15 p.m., Friday): Both teams will have already played a District 12-AA game this week as Milan hosts Westview and Union City hosts Huntingdon on Tuesday. Milan is 4-4 away from home this season, so the Bulldogs will try to get a district road win. The Bulldogs will have to slow down Union City’s Malaki Brooks, while they also have to get scoring from players outside of Jodarius Robinson.