Humboldt businesses may be getting a facelift after the announcement was made by the state of Tennessee last Thursday. Humboldt will receive $150,000 to be used to update downtown businesses’ facades.

Humboldt Chamber of Commerce Executive Director Amanda Love said she was thrilled when she heard the news.

“We applied for the grant twice,” Love stated. “I’m thrilled. This will do a lot for downtown businesses, specifically for signage, awnings or paint.” 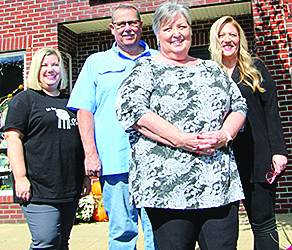 “I congratulate the 14 communities receiving funding through the Downtown Improvement Grants,” Gov. Lee said in a press release. “These leaders are focusing strategic investments on revitalizing their downtown districts, which are the heart of so many of our communities. This will encourage additional economic development and tourism opportunities for years to come.”

A total of $1.85 million in Rural Economic Opportunity funds is being awarded in amounts up to $150,000 per community. Grants were awarded to organizations that illustrated the need for improvements and the ability to execute an effective design plan for building facades, wayfinding signage, courtyards, gateways and streetscapes in Tennessee Downtowns and Main Street communities.

Director Love said businesses will have to apply for funds and noted it is a 75-25 matching grant, meaning the owner will have to expend 25-percent of the upgrades and be reimbursed the remaining 75-percent through the grant.

“There will be an application process where businesses have to fill out forms to qualify,” Love added. “Grants will be awarded through non-involved judging and not by the chamber. It’s a competitive process.”

Love said there are some downtown businesses interested in applying for grant funds. There will be a ceiling amount businesses may apply for within the total $150,000 grant.

“With the assistance of the Downtown Improvement Grants, each grantee is taking the initiative to encourage job and business growth in their downtown commercial core areas,” Commissioner Rolfe stated in the press release. “We applaud the efforts of these communities and look forward to seeing how these projects will positively impact these areas of the state.”

“This round of Downtown Improvement Grants is an expansion of TNECD’s long-running Commercial Facade Improvement Grant program,” said TNECD Assistant Commissioner of Rural Development Brooxie Carlton in the press release. “In addition to funding commercial building facade improvements, communities are working on activating outdoor spaces and providing public amenities in their downtowns.”

To be eligible, communities had to submit applications and be a designated Tennessee Downtowns or Main Street community.

Love encourages businesses within this district to apply for grant funds to make improvements to their storefronts. With the updated facades, downtown will be even more attractive.