Even though the Vietnam War ended almost fifty years ago, last week’s ceremonies at the Vietnam Traveling Memorial Wall in Trenton proved that the pain and honor born from those 20 years of conflict is still felt today. In the short time the Wall stood at Pedestrian Park, hundreds of veterans and the families of those lost in the war visited the replica to pay their respects and ease the lingering pain.

Signalman Second Class George Atkins, the guest speaker for the event, referred to the memorial as a “Healing Wall,” a place for veterans and families to get closure for their losses, but for some the reflections shown on the mirrored surfaces are still painful to relive. 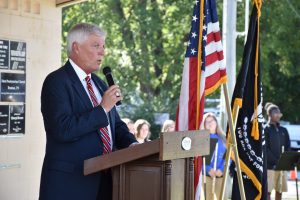 “After these years, I still find it extremely difficult to talk about my experiences there,” said the soft-spoken Navy veteran, his voice belying the aftermath of two tours of duty in the jungles of Vietnam.

“I left Vietnam, however Vietnam never left me. Over time, I began to enjoy combat. I found it stimulating. Although I had seen and done things which many might call inhumane, I developed a sense of absolute power. When asked in later years by my psychiatrist to define absolute power, I replied that if I don’t like someone or something, I just blow it away. Most nights now, I relive my actions in nightmares.”

The pain felt by Vietnam veterans did not end overseas. It followed them home.

“I don’t think the protesters ever stopped to realize that the vast majority of us in Vietnam would much rather have stayed home,” SM2 Atkins said. “While my heart aches for the 58,000 brothers and sisters on the wall, I’m almost glad they didn’t have to experience our welcome home. We had no yellow ribbons, no brass bands. No hugs at the airport. Most of us decided to sneak home under cover of darkness after the reception we received in California. Bags of fecal matter being tossed at us and hearing chants of ‘baby killers’. Many of us even opted not to wear our uniforms home. Not even our own country’s veterans organizations wanted to be associated with us.” 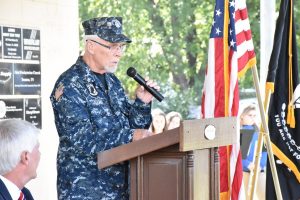 “I attended the unveiling of the Wall in Washington, D.C. on November 11, 1982, and I’ve visited the Wall many times since,” SM2 Atkins said. “In my experience, I found it to be a wall of faceless ghosts and many reflections. I’m no less respectful of it. I see it as a reminder of our shortcomings as a nation and as a tribute to those brave men and women who gave their all for this great country. I give my utmost prayers to the Gold Star mothers and families. For this one moment, I wish I could trade places with their loved ones so they could hug them once again. I hope in my heart we can find a way to reunite this great nation against all enemies, both foreign and domestic.”

Elton Wilkerson, Commander of American Legion Post 55 in Martin, thanked those in attendance for helping to provide veterans and the public with the opportunity to witness the Healing Wall.

“I never understood what that meant until I went to visit it,” Wilkerson said. “58,000 plus men and women gave their life for your freedom and my freedom to be out here today. Every name on that wall was a son or a daughter, a brother or a sister, a mother or a father. It has affected many, many lives over the years. Even though 58,000 is a tremendous number to have lost to a war, the wall is not quite big enough to handle all the deaths that were caused by the Vietnam War. From the end of the war until the present, there have been over two million Vietnam veterans that have succumbed to Agent Orange. The Vietnam War is still affecting people today.” 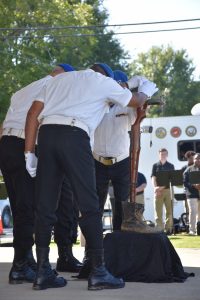 To close the ceremony, local Boy Scouts and members of the Veterans Honor Guard of Parkers Crossroads presented families of Gibson County veterans with flags that had flown during the exhibition, as well as plaques commemorating the visit. The remaining flags and plaques were donated to the Veterans Museum in Halls, where they will be displayed proudly. 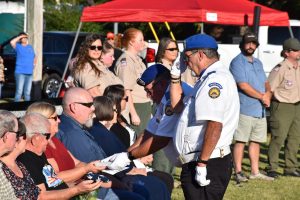