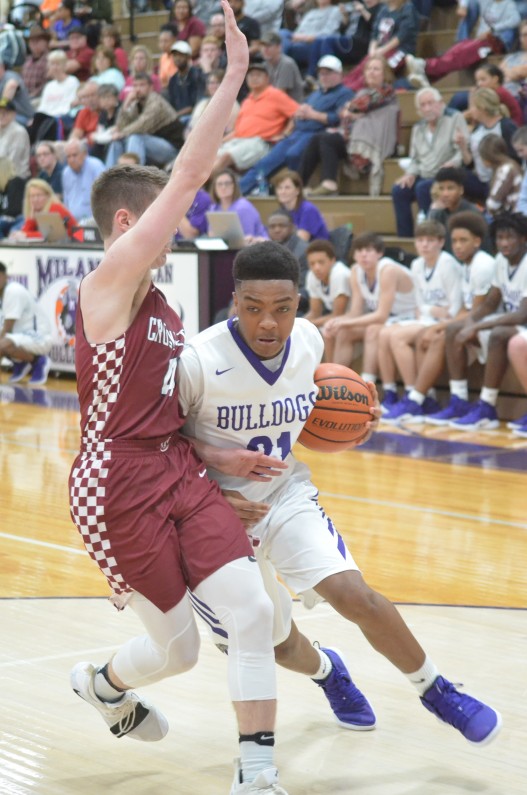 Played on Senior Night before a raucous, cheering Milan crowd, the exciting game was tied 7 times, including 41-41 going into the fourth quarter.

Down the stretch, the Dogs surged with share-the-ball offense and strong buckets despite fouls by Cav defenders. Terrick Glenn made a jumper, a rebound-putback, free throw, defensive steal and score; Austin White had an inside post move, Kylan Johnson had a fast break bucket and free throw, and Isaac Sturdivant made a driving basket and foul shot with 4 minutes left.

Milan ran clock before White scored again and blocked a Cav shot. When Johnson swished two free throws, the Dogs had a 10-point lead, 60-50 with 2 minutes left. A three-point play by Cav Josh Owens inched Crockett within 60-53, but that was the only field goal the Dogs’ allowed in the final 3:35.

“I’m proud of the way we competed,” said coach Kendall Dancy. “We stressed sharing the ball, being there for one another, taking care of business on the defensive end, finishing plays until we rebound the basketball, not being late, not missing assignments, finishing around the basket – the things that are fundamentals that make the difference between winning and losing. So I’m proud of us, finally being able to close out a ballgame against a pretty good team.”

Terrick Glenn led Milan (7-17, 2-6) with team-highs, 19 points, 8 rebounds, 3 assists and 3 steals. Davante Herron and Austin White each added 12 points. Isaac Sturdivant came off the bench to score 11 points, including back-to-back three’s that put Milan up 41-39 in the third period.