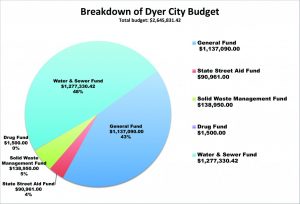 by J.D. Pinkerton and Staff

Also last week, longtime Dyer Fire Department Chief Roger Worrell submitted his letter of retirement to the city board. Worrell has worked for the city 40 years.

The last water and sewer rate increase was in 2011. Current tax rate is $1.74 with no increase this year. All four ordinances require a second reading.

Earlier at a committee meeting, all rates were considered. “We passed an ordinance last year that garbage rates will be raised every year unless we decide not to,” said alderman Ray Carroll. “Would it be wise if we refrain from raising garbage rates this year?”

Michael Barron said, “I think we need to refrain from something.” Ray Carroll agreed with Barron.

Water and sewer utilities in Tennessee are now required to show a “positive change in net position” each year. A positive change in net position is essentially “profit”. The regulations are designed to ensure that utilities are operated in a financially sound way and that they can maintain and update facilities in order to provide safe, reliable water and sewer services to their customers.

“The most recent change to state law means that Dyer can no longer count grant revenue in the state’s calculation of net position,” said Reed. “This change in the law hits small cities especially hard.” Reed explained that the state calculates net position (profit) based on all the expenses a utility incurs, including depreciation, but that only operating revenue (not grant revenue) is included in the calculation.

Under the proposed new rates, most subscribers would see a monthly increase of $6 or less. The average subscriber uses approximately 4,200 gallons of water per month, 75-percent of subscribers use less than 5,000 gallons per month. City of Dyer utility bills include water, sewer, and garbage disposal.

Dyer Mayor Chris Younger said, “We’ve done all we can over the last few years to keep costs down and keep bills low, and I think we’ve done a good job. We’ve been able to upgrade several water and sewer facilities without having to borrow a single dime. Now that we can’t count grant money and with depreciation costs going up, we’ve got no choice but to do the responsible thing and increase rates. Everybody knows that nothing we buy is getting cheaper and that’s the same for the city – everything is more expensive. We’re doing our best to manage costs, but we have to keep the water and sewer system in good shape.”

Carroll said, “Nobody wants a rate increase. I don’t want a rate increase. This affects us all, but we also want to maintain the equipment and services we have, and we’re left with little choice. This will be the first increase in six years. I think we’d all prefer incremental adjustments, and we’re committed to annual rate evaluations from now on.”

The City will evaluate water rates every year from now on, “We don’t want to increase rates unless we have to, but we don’t want to have a huge increase, either,” said Younger. The new regulations from the state will mean that an annual evaluation will be absolutely necessary.

Mayor Younger has called for a town-hall meeting to discuss the proposed rate changes and for subscribers to ask questions on June 8, 2017 at 7:00. He’s asked that those attending register by filling out a short form; if a phone number or email is included, the City will send out a reminder. The venue will be determined based on how many plan to attend.

At the earlier committee meeting, board member Tom Mikkelsen proposed putting water and sewer supervisor William Caton over the street department as well. This would put Caton over current street supervisor Stephen Tucker.

“There is too much chaos in the street department over job issues, maybe too many bosses or not enough clarification as to who is doing what. We got to do something different that what is going on. I don’t have a problem with trying this for six months,” Mikkelsen added.

Ray Carroll said, “The only change is going to be with Stephen and William working more closely.”

“I’d like to see Tucker fixing more things in the town and if he has to be in charge of others and what they are doing, it will detract from his overall performance. I think it will be less stressful on Tucker if he won’t have to concern himself with that.”  Mikkelsen confirmed there would be no change in pay.

“I am concerned, since Tucker has been here 11 years, for you to put another man over him,” said Robert Johnson. “This man has been doing the job and the work.”

Johnson said, “William, how long does it take you to get through a normal day at the Waste Treatment plant?” Caton said, “There is always something to do there. That place needs to stay clean. We got State Reports, EPA Reports, we have daily stuff we have to test.” Caton said, “Tyler (Landrum) steps up to the plate pretty good. Tyler is a very responsible young man.”

Johnson said, “To me, when you pull a supervisor and put a man over him, what is that going to do to his morale?”

Jennifer Hughey asked Tucker how he felt about it. To which, Tucker said:

“I don’t like it at all. If I tell these guys something to do and he comes in behind me and tells them something else… All these years I’ve been telling these guys what to do and suddenly it’s not my job anymore.”

Carroll said, “I’m not saying this is necessarily a bad idea but I’m feeling tensions in it already. Maybe we should have another meeting and talk about this some more.”

No action was taken on this proposal during the regular meeting.