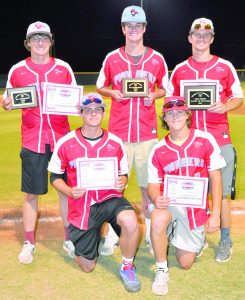 Gibson County Pioneers defeated Lake County 7 to 3 on Monday afternoon to face Trenton in the semi-finals of the 14-A District tournament but fell to Trenton Peabody 9 to 1 on Tuesday night to end the 2017 baseball season.

Monday afternoon the Gibson County Pioneers faced the Lake County Falcons in the fourth round of the 14-A District tournament in Union City. The Pioneers scored a run in the bottom of the first inning. Stephen Overstreet walked to start the game then Sam McKinney singled up the middle with one out. Mac Hicks hit a deep sacrifice fly to centerfield to score Overstreet to give Gibson County a 1 to 0 lead.

In the top of the second inning the Falcons hit back-to-back singles and hit a sacrifice fly to score two runs to take a 2 to 1 lead Lack County. GC senior Josh London led the second inning off with a double to left-center field and stole second base. Caleb Branson walked and London scored on a fielder choice by Cameron McMackin to tie the game at 2. Will Cantrell hit into a fielder’s choice to score Branson to give Gibson County a 3 to 2 lead over Lake County.

In the bottom of the third inning Hughes reached base on an error than stole two bases and scored on a fielder’s choice by London. Gibson County took a 4 to 2 lead.

Neither team scored in the fourth inning. The Falcons scored a run in the top of the fifth inning to make it 4 to 3. The Pioneer answer right back by scoring three runs in the bottom of the fifth inning. McKinney and Hughes hit back-to-back doubles and Austin Atkins singled and all three scored to give Gibson County a 7 to 3 lead.

Neither team was able to score in the sixth inning. Pioneer pitcher Tyner Hughes struck out the side to end the game for a 7 to 3 Gibson County victory.

The Pioneers meet the Peabody Golden Tide in the semi-finals of the 14-A district tournament. Neither team was able to get on the scoreboard in the first two innings.

In the bottom of the third inning Peabody’s Timothy Fields led off with a single between first and second base. Halbrook hit into a fielder’s choice and Fields advanced to second base. Hunter Hudson singled down the right field line and Fields scored on the throw home and Hudson advanced to second. Ethan Richardson and Will Pickard both grounded out to end the inning.

Peabody took a 1 nothing lead over Gibson County.

Landon Pickard started the bottom of the fourth off with a single down the third baseline, Cade Roberts reached base due to an error and Landon Pickard scored. Roberts scored off a triple to left field by Fields to make it 3 to 0 Peabody.

The Golden Tide added three more runs in the fifth inning off a single by Hudson, a double from Richardson and a single by Will Pickard to extend Peabody lead to 6 to 0.

Peabody’s Landon Pickard and Eli Hammonds both singled in the bottom of the sixth inning to score three more runs to make it 9 to 0 Peabody.

In the top of the seventh inning Tyner Hughes walked and stole second base. Hughes scored off a double to left field by Austin Atkins but the next two batters made outs to end the Pioneers baseball season. Peabody defeated Gibson County 9 to 1.