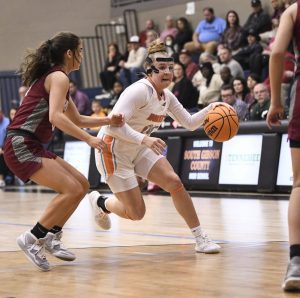 South Gibson’s Hallie Allen (24) drives to the basket against Crockett County during a high school girls basketball game at South Gibson on Dec. 13, 2022.

Been a while since I picked games in the Gibson County area as games leading up to Christmas were few and the week between Christmas and New Year’s Day were tournaments.

But before the Christmas break, I bounced back by going 4-1.

Here are the Week 8 games:

TCA (12-3) at South Gibson (12-4) Girls (6 p.m.; Tuesday): Over the last two weeks, the Lady Hornets have played three games in White County and three games in Panama City Beach, Fla. The team has grown through those games. TCA does have the reigning Division II-A Miss Basketball Olivia Lee.

Milan (11-3) at Bradford (7-5) Boys (7:15 p.m.; Tuesday): When the Bulldogs won earlier this season, Bradford’s Bryce Arnold was out with an injury. He is back, but Milan is still shutting teams down with their defense. Arnold will make the game closer, but can he help the Red Devils win?

Crockett County (12-2) at Peabody (6-7) Girls (6 p.m.; Thursday): In the first meeting, the Lady Cavaliers pulled out the four-point win. This time the game is at Peabody and the first of two games in two days for the Lady Tide.

Bradford (7-5, 0-0 13-1A) at Greenfield (4-6, 0-0) Boys (7:15 p.m.; Saturday): This is the District 13-A opener for both teams. The Red Devils are the defending district champions, and they want to repeat that feat this season. Greenfield could be the second best team in this district, so Bradford will have to come out strong.