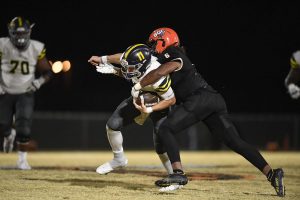 Over the past two years, the potential for South Gibson’s Cameron Clark to be a high-level recruit in either football or basketball.

But a few small injuries have limited Clark from reaching that potential.

This past season, Clark had a strong season in football, being named the Region 7-4A defensive player of the year. And by getting his highlight film out, he has received 10 offers to play college football, including two Power-5 offers.

“It was getting my tape out,” Clark said. “Everyone was saying that I needed to get my highlights together, so I made a highlight film. Coaches started reaching out to me, and that is how it all started.”

Spending more time as a starter this season, Clark put on a show defensively as he played as a linebacker, and a few times as a defensive end. He finished the year with 60 total tackles, including 11 tackles for loss, 6.5 sacks, 1 forced fumble and 11 quarterback hurries.

“Every day, I would just trust in (South Gibson) Coach (Ben) Johnson, and he would put me in the best positions,” Clark said. “I wanted to be the best leader that I could be, and I know I would have to step up a lot, especially on defense just to have the chance to be where we wanted to be.”

As the season progressed, Clark put together a highlight reel and started getting that out to college coaches.

That hard work on the field and getting the highlight reel out resulted in Clark getting his first offer on Oct. 26 from Miami (OH), and two days later, he received three more offers from UT Martin, Austin Peay and Eastern Kentucky.

“At first, it took me a few days to realize that I picked them up; it was still a complete shock,” Clark said. “I am completely blessed. I got them late in the season, and it was an eye opener for me.”

But it was on Nov. 26 when Clark got his first Power 5 offer from Vanderbilt, and he added another on Dec. 19 from Virginia Tech.

“Vanderbilt is always one of the top schools, and it is an SEC school,” Clark said. “That visit there was great, talking with the coaches, it went really well.”

Clark did hit a small setback at the end of the football season as he broke his hand. He was forced to get it cast and would miss the start of the basketball season. Due to the length of healing, the decision was made to just miss this year of basketball to heal and focus on football.

“It was challenging because basketball has been in my heart since I was young,” Clark said. “With this injury, it was my third injury. It is getting healed and getting better.”

So once his hand is healed, Clark will put in the work to be ready for a strong senior season.

And as for recruiting, there is no specific team that Clark is waiting on. He is just going to continue to take in the offers and plans to go on some unofficial visits in the offseason with stops at Miami (OH), Coastal Carolina and Virginia Tech on the list of possibilities.