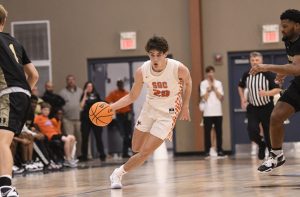 South Gibson’s Ashton England (20) dribbles the ball up the court against Dyersburg during a high school boys basketball game at South Gibson on Dec. 2, 2022.

Well, I missed my first pick of the season as Trinity Christian Academy beat Gibson County in double overtime. It won’t be my last miss of the season.

I still went 3-1 as Tuesday’s game between Dresden and Gibson County was postponed, and I am 13-1 (.929 winning percentage) overall.

Check out the top games in Week 4:

Gibson County (5-3) at South Gibson (6-0) Girls (6 p.m., Tuesday): Even though the Lady Pioneers have three losses, they are still a dangerous team. The three losses are to Bartlett, TCA and South Side. But the Lady Hornets are off to an undefeated start through a strong defensive effort.

Peabody (3-2) at Crockett County (5-0) Girls (6 p.m., Tuesday): While the Lady Cavaliers are undefeated, they are yet to be challenged in a game. Peabody should provide that challenge with multiple weapons and pressure defense.

Gibson County (4-2) at South Gibson (4-2) Boys (7:15 p.m., Tuesday): The Pioneers are coming off consecutive losses to TCA and Henry County. So they will be looking to get back to winning. South Gibson is finally getting healthy from sickness after battling missing players for two weeks.

Milan (4-0) at South Gibson (4-2) Boys (7 p.m., Thursday): This is a boys’ only night as the girls decided not to play. This is a big rivalry game. This will be Game 4 of a five-game road streak for the Bulldogs, but they should be trying to keep an undefeated season intact (depending on what happens Tuesday at Madison). South Gibson will have to hit outside shots to have a chance.