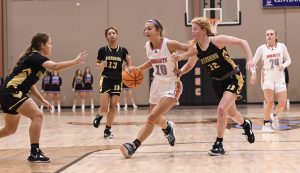 South Gibson’s Lily Baggett (20) has helped the Lady Hornets to a 6-0 start to the season after breaking her left fibula during the 2022 District 12-3A championship game in February.

Having worked so hard throughout the season, the South Gibson girls basketball team was ready to reap the rewards of all the time and effort at the end of the 2021-22 season.

Playing for the District 12-3A championship, the Lady Hornets were ready to peak. But during the second half against South Side, everything seemed to unravel.

Point guard Lily Baggett went down with a leg injury that she later found out was a broken fibula in her left leg.

“I remember it was a jump ball, and I ripped the ball away and she fell down and hit my leg,” Baggett said. “It was a sharp pain, but I thought I was fine and tried to get up. But I couldn’t put any weight on it. I started crying because it hurt.”

South Gibson lost in the district title game and two games later were eliminated in the Region 6-3A semifinals.

Baggett is back though for her senior season, ready for her best season yet. And ready to try to get the Lady Hornets back to the district championship game and make a run at the Class 3A state tournament.

“I think the point guard is the extension of the coach,” South Gibson coach Catie Embrey said. “We saw the arc last year from when I got there and she was insecure and unsure of herself to a kid that you see now that was confident and wanted the ball in her hands. You saw that player arc changing, especially when it looked like we were going to make a push and get to a substate game, and it was all gone for her.”

Baggett was a force all over the floor as a junior for South Gibson. She averaged 10.2 points, four assists and 3.5 steals per game. She also made 48 3-pointers, shooting 37 percent from long range.

Baggett also led the team in blocked shots as a point guard.

South Gibson was 21-6 through the regular season and beat North Side to reach the District 12-3A title game.

But that is when Embrey’s game plan for the postseason got completely changed. Losing to South Side wasn’t the bad part, losing a point guard was.

“So we took the primary ball handler that takes care of the ball 90 percent of the time away,” Embrey said “She allowed the other girls to be in the position that they were comfortable with for 90 percent of the season. So we had to take Hallie (Allen) out of her position to bring the ball up the court. Losing Lily was crippling.

“If we would have had a couple of weeks to prep whoever we needed for that primary ball-handling position, that would have helped. Having more time to figure that piece out before that do-or-die game against Hardin County, it would have been better. It was a jigsaw puzzle that we had to figure out quickly. It was one of the hardest things that I have done as a coach.”

Baggett tried to walk on the floor to accept her all-district regular season and all-district tournament honors following the title game. But the pain was evident.

“My teammates all prayed over me, and then I went to the hospital and my coach and a couple teammates were there,” Baggett said. “I remember when I got the x-ray, they said nothing was wrong and thought it was the muscle. Then we were talking about my height and how my growth plates could still be growing. When they went to look at that, they saw the crack.

“I want to be selfless, but in my head, I wanted to be out there. I did my best to try and cheer them on.”

The Lady Hornets beat Chester County in the Region 6-3A quarterfinals but ran into a strong Hardin County team in the semifinals.

Three months of no basketball followed for Baggett as she worked to heal to begin physical therapy.

“I had never had to do that my calf raises in my life,” Baggett said. “The physical therapy was hard, but it was also hard mentally. Going to practice, watching them practice and not being able to do anything.”

Baggett put in the work from there to make sure she continued to get stronger as the start of her senior year neared. And now South Gibson is off to a 6-0 in what could be a special season for the Lady Hornets.

“I did the therapy for six to eight weeks, and then I was in the gym, getting extra shots up,” Baggett said. “I worked on footwork and speed. I know the potential that we have as a team, and I know how much we have worked to get where we are.”