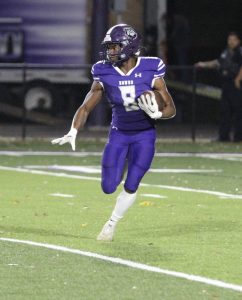 Milan’s Trey Spinks (8) runs back a kickoff against Ridgeway during the Class 4A high school football first round game at Johnnie Hale Stadium on Nov. 4, 2022.

What a second round of picks for Michael Odom in the pick’em contest. Odom and Victor Parkins differed on four picks this week, and Odom got all four correct.

So here is what is happening in the quarterfinal round of the Division I playoffs and the Division II semifinals in Gibson County and across West Tennessee:

For the Bulldogs to have a chance, they are going to have to play mistake free as Haywood has already beaten them by 41 points this season.

This is one of those playoff matchups that fans have wanted since the start of the season. The Golden Tide will be the best team that MASE has faced all season.