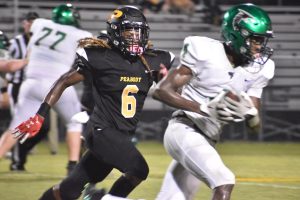 Peabody’s Jacoby Albea (6) runs down the ball carrier against Lake County during a Week 3 high school football game on Sept. 2, 2022.

Wow, what a week of games in Week 3, and Gibson County led the way with three great ball games with Milan-South Gibson, Peabody-Lake County and West Carroll-Humboldt.

After Week 3, Michael Odom gained another game on Victor Parkins. Odom went 13-1 with the lone loss being Milan’s win over South Gibson, while Parkins went 12-2, missing Chester County over McNairy Central and Obion County over North Side.

RANKINGS: Milan moves up to No. 7 in West Tennessee football rankings after Week 3

So here is what is happening in Week 4 in Gibson County and across West Tennessee:

This is a Thursday night game. The Golden Tide will look to stay healthy on the road at a 4A school.

Can the Hornets bounce back from the first loss of the season get a win before region play returns in Week 5?

The Bulldogs are coming off the team’s biggest win since they beat Pearl-Cohn in the 2020 state semifinals.

The Lions have scored 132 points in the first three weeks of the season. Will Gibson County have an answer?

The War Eagles are playing well with new components on offense, so can they knock a South Fulton team on the road?

North Side at Ripley