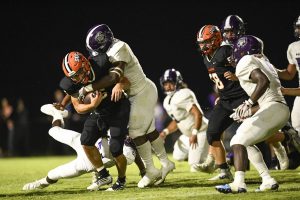 A dominating first half by Milan turned into tense final minutes before Andy Westbrooks nailed a 28-yard field goal as the clock expired to give the Bulldogs the 24-21 victory over South Gibson in the Region 7-4A opener for both teams.

In the first half, Milan’s defense held South Gibson to 63 yards of offense. And a 28-yard touchdown pass from Westbrooks to Carson Pruitt on Milan’s second offensive play put the Bulldogs in the lead 7-0 with 9:57 remaining in the first quarter.

An interception by Milan’s Malakai Cunningham on South Gibson’s ensuing possession set up a nine-play, 53-yard drive capped with a nine-yard touchdown pass from Westbrooks to Bladen DePriest put the Bulldogs up 14-0 with 1:32 left in the first quarter.

Milan took the second half kickoff and drove it 71 yards with Jones scoring from nine yards out to Milan ahead 21-0 with 7:51 left in the quarter.

But that is where the tide turned.

South Gibson scored a touchdown on its next three possession to tie the game 21-21.

South Gibson’s defense forced another punt, and an 11-yard run by Howe with 3:29 remaining tied the game.

But a short kick and Milan return to the South Gibson 44-yard line set the Bulldogs up to try and retake the lead.

With three seconds on the clock, Westbrooks hit a 28-yard field goal as time expired to give Milan the 24-21 victory.

While he didn’t score, Mekhi Carr led Milan with 143 yards rushing on 24 carries.

Despite injuries to key players, the Golden Tide picked up a second straight win and opened Region 7-1A play with a victory.

Peabody didn’t score in the first quarter, but a 15-yard touchdown run by Billy Wilkins with 5:21 left in the first half put the Golden Tide up 7-0.

Four minutes later, Sam Driggers ran nine yards for the 14-0 lead, but Lake County scored at the halftime whistle to cut the Golden Tide’s lead to 14-6 at halftime.

To open the second half, Peabody’s Derek Kee blocked a Lake County punt that was recovered by McCoy Sewel for a touchdown and the 20-6 lead.

But Lake County scored the next two touchdowns to cut the Peabody lead to 20-18, which held through the end of the quarter.

The next two touchdowns came via Driggers to give Peabody the 41-26 lead with 55 seconds to play.

Driggers completed four passes for 120 yards and a touchdown, and he rushed for 95 yards and three touchdowns. Wilkins rushed for 121 yards and one touchdown. Kee had three receptions for 112 yards.

Jay Long scored a pair of touchdowns as the War Eagles opened Region 7-1A play with a win at home.

Long scored his first touchdown from four yards out with 5:50 remaining in the first quarter for the 7-6 West Carroll lead.

Humboldt answered with 10:10 remaining until halftime as Eli Moore scored from 10 yards out to cut the War Eagles’ lead to 7-6.

With 6:55 remaining in the game, Long scored his second touchdown from 23 yards out to give West Carroll the win.

Jaquari McCurry threw for 91 yards on 12 completions and rushed for 24 yards on 14 carries to lead the Humboldt offense.

For the first time this season, the Pioneers were shutout. Westview, the defending Class 2A state champion, picked up its first win of the season.

Quincy Hamilton picked off a pair of Gibson County passes to help the Westview scoring.