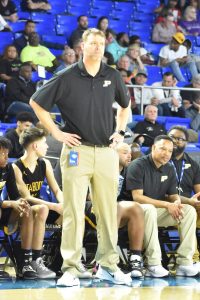 Peabody coach Wes Miller watches on as the Golden Tide played McKenzie in the Class 1A boys basketball state quarterfinals at the Murphy Center.

“17 years ago, I worked at Henry County, and as a 24-year old kid, you don’ think about retiring,” Miller said. “I always thought that Paris was a great place to retire. My wife and I have wanted to retire there, and that was a goal of ours. We just didn’t think this goal was going to start 11 years before I could retire. When a place like Henry County opens, you have to take advantage of it because someone else might take it, and you never get that chance again.”

Miller has been the Golden Tide’s head coach for five years and has accrued a 106-55 record.

He will replace Mike Greer, who retired at the end of the 2021-22 season. Henry County went 22-3 last season, reaching the region semifinals before losing to Clarksville.

Miller was an assistant coach at Henry County under Tom Wee.ks during the 2004-05 season.

“When I started at South Fulton, our first district game was at Peabody, and they absolutely demolished us,” Miller said. “I looked at my assistant and said that this is a place you can win. They have athletes and everything you need to be successful. I have won here more than I have anywhere else, and that is because I had great kids.”

The search for a new head coach will begin immediately by the Peabody administration.