A somewhat touchy topic was once again on the Humboldt School Board’s agenda last Thursday evening. A few times over the past several years, the board has visited the subject of being paid for their service.

During the school board’s February meeting, pay for the school board was open to discussion. Director of Schools, Dr. Janice Epperson said Gibson County Special School District board members get $60 per month and the chair $100. Other school districts in the county do not pay the board members. It was noted that Jackson-Madison County School Board members receive $300 per month. At the February meeting, the board agreed to bring it back for a vote during their March 10 meeting.

Pay for board members was the first agenda item of the Thursday meeting. Board chair, Valeria Wedley, asked for a motion and a second, in order to have discussion. Board member Terry Johnson made the motion but no other board member seconded until Wedley herself seconded the motion.

Dr. Epperson said she had done more research and reached out to Tennessee School Boards Association (TSBA). She asked Technology Director Wayne Sheehan to offer some important information the board would need before making their decisions.

Sheehan said he looked at the city’s charter and noted if the board does approve being paid, that would not go into effect until the next election. Sheehan explained that boards cannot vote themselves a pay raise or vote to be paid while they are in office.

Since three of the five school board members (Wedley, Johnson and Mark Hodge) were just elected last November and sworn into office in January, those positions would not get paid until the next election cycle, which would be in 2025. The two other school board positions currently held by Wayne McLemore and Leon McNeal will be up for election in 2023 and sworn into office in January of 2024. That’s when those positions would be paid for their service.

“That sounds good,” Johnson stated of the wait time for board members to receive pay.

“That’s what we thought,” Wedley added. “Hopefully this will get people to run (for school board seats).”

“I’ve always been against it,” board member Leon McNeal said. “I’ve voted it down, even older boards always voted it down.”

Johnson noted that he never voted it down, referring to a similar request to get paid a few years ago.

Wedley added that pay for board members had not been on the agenda since she has been on the board.

McNeal continued his thoughts on school board members being paid and said, some things are public service. He reminded the board that every one of them ran for election knowing there was no pay.

Dr. Epperson said she brought the topic up at one of her superintendents’ meetings. She also noted the Humboldt city aldermen are paid.

Humboldt aldermen are paid $300 per month and they meet twice a month.

“Whether I’m for it or against it, no one on this board will get paid,” Dr. Epperson explained. “That’s for the next ones (elected).”

Johnson then took a crack at McNeal who does get paid as a city alderman, saying, “Being an alderman is public service, you get paid.”

Hodge, who was on the fence as to vote for or against being paid, said, “Knowing it’s four years off (until his school board seat is up for election), that helps me a little more.”

Hodge also said knowing the aldermen are paid was a key part of his decision.

Wedley said someone might have to take off work to attend school board meetings.

“I chose to run without pay,” McNeal continued. “I’m against it.”

In two years, the school board’s monthly pay will total $120 or $170 if one of the newly elected board members is also voted chairman. In four years, the total pay for the entire board will be $350 per month.

•As board chairman, it is Wedley’s responsibility to appoint a board member to serve on the budget committee. Wedley asked Hodge if he would like to serve, which he agreed.

Wedley also wanted all the school board members to attend the budget meetings, but would not be able to speak.

•The board unanimously approved continuing the schools’ contract with 1Tennessee for internet service. This was Director Sheehan’s recommendation.

•During Dr. Epperson’s superintendent report, she asked some of her team members to update the board on some very positive projects going on for Humboldt City Schools, teachers and the students.

Director of Professional Development Jozelda Porter spoke about Humboldt being designated a Tennessee Reading 360 district. She said the state created this program as an initiative to have students reading on grade level by the third grade. Porter said the program is for pre-k through third grade but Humboldt will utilize a summer program for grades 5-12 as well.

Academic Coordinator Michelle Lewis told the board that the state would fund a program for Humboldt City Schools that includes ACT testing program that ties in with the Career and Technology Education (CTE). Lewis noted that testing is very expensive and this program’s funding will be a big advantage for Humboldt students. Humboldt students can earn CTE diplomas and certifications, making them job ready right out of high school. These credentials can also be transferred to a 4-year college to earn freshman credits.

Wedley really liked the program, especially how it could save students a lot of money their freshman year of college.

McNeal liked the vocational aspect of the program. He noted not all students are made for college and those students can get career training.

“We push for college and career,” Dr. Epperson said.

During her report, Dr. Epperson said Humboldt had 13 students who qualified for the Gibson County Jumpstart Scholarship. She noted there had never been this many students to qualify in the past.

Both Sheehan and Dr. Epperson said this program has not been approved by the state legislature. They both expect the State House and Senate will make changes to the final bills in Nashville before it is approved.

TISA will replace the Basic Education Program (BEP) that has been in place for years in Tennessee for public school funding. 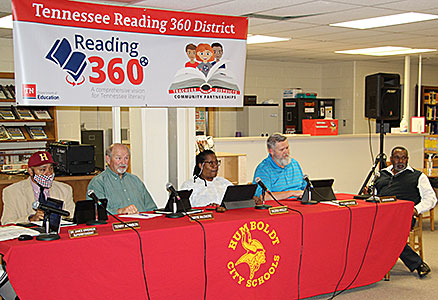 SCHOOL BOARD – The Humboldt School Board voted Thursday evening to pay board members $60 per meeting and $110 for the chairman. This will not take effect until the board seat’s next election cycle. No one currently on the board will be paid unless they run for office and are re-elected for another term. Board members (from left) Terry Johnson, Wayne McLemore, Valeria Wedley, Mark Hodge and Leon McNeal had plenty of healthy discussion on paying the board members. Johnson, Wedley and Hodge voted for paying school board members while McNeal and McLemore voted against.