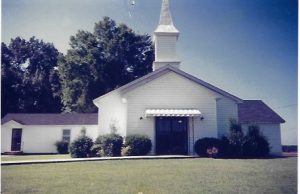 With saddened hearts and emotions, a decision was recently made to close Olive Branch Methodist Church near Eaton.  This is the oldest Methodist Church and perhaps the oldest church in Gibson County.  First established in 1825 and Olive Branch was organized in the home of James Latta who conducted the first services there.  By 1833, its congregation had increased sufficiently to warrant the building of a church.  The land for the building was donated by Dr. Devereux J. Claiborn with the deed recorded on March 22, 1833.  The church was to be located on the old Trenton-Eaton Road.

There have been several Olive Branch church buildings over the years at that same location.  The first in 1834, another built during the World War I era.  The second church was built with the best poplar lumbar and the great ax-hewn sills fastened together with large square nails.  The very steep roof was made of cypress shingles.  Through time, the church began to need so many repairs that it was decided to build a more modern building.  This resulted in the present and third church building completed in the summer of 1956.

The last Sunday Olive Branch service will be Sunday, March 6, 2022.   For 197 years, this church has been in existence.  It also served as the “Mother Church” for what would become the First United Methodist Church (then the Methodist Episcopal Church South) of Trenton which it helped to found in 1826.

Olive Branch has also been the site of a cemetery with approximately 200 graves.  The earliest burial was in 1863 for J.P. Stewart born in 1811.  Many of the present grave headstones are either missing or in need of repair.

Olive Branch’s mission statement in answering “Who we are”” was answered this way.  “We are a fellowship of believers, made in God’s image and called as disciples of Christ to share the Good News with everyone through learning, listening, praying, and working together actively to reach out to our communities.  We are a place to believe, belong, and become!”

Olive Branch’s membership numbers have been on the decline for quite some time due to the passing or the moving of its members.  Lately on Sunday mornings it has been typical to have only from three to six members present.  The last remaining members include Della Sammons, Jimmy and Diane Evans, Dan and Joanne Baily and Sylvia Tosper.  Della Sammons, a lifelong member stated “it is a sad feeling to see this church close after spending all my life as a member.  She went on to say, however, that the time to end it became apparent and no point of continuing the church with so few attending.   Della stated she had so many good memories of her time there, and that we were lucky to have had wonderful caring ministers that have served us so well.  She has been very close and supportive to their last minister Brian Griffith.

Brian, of course, has pastored both Trenton United Methodist and Olive Branch as well.  Upon reflecting on the closing of Olive Branch, Brian made the following remarks.

“Ecclesiastes 3 tells us that for everything there is a season.  A time to plant, a time to harvest, a time to be born, a time to die.  I think that this is true of churches as well.  Olive Branch had its season of planting and harvesting, of people growing up with Christ and coming to Christ.  It served the community well for so many years, but now it moves into a new season.

A church closing does not diminish the work it did for the Lord, it simply means that maybe it is time to hear God say, well done good and faithful servant.  Olive Branch was what the community needed for almost 200 years, but now, as the community has changed, a new season has come.

I am proud to have had the opportunity to serve this church and witness and be a part of the faithfulness of those who attended.  Thank you for your service and legacy Olive Branch, well done.”

The church invites all to come to their last service on Sunday, March 6 beginning at 9:45 a.m. to celebrate this long beloved church which greatly helped to strengthen Methodism in our county.  May it be forever remembered in feelings of love, faith, and accomplishment.