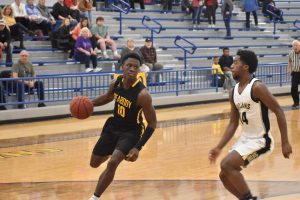 Peabody’s Malik Ganaway (10) drives to the basket against Dyersburg in the Martin Lions Club Christmas Tournament on Dec. 28, 2021.

Christmas, Christmas tournaments and New Year’s parties are over. The start of the second half of the 2021-22 season is here.

All of the Gibson County area teams kick off with games this week, so there were plenty of good matchups to pick from.

Check out the top games in Week 7:

SCHEDULE: Matchups for Gibson County area teams during Week 7 of the season

Gibson County (17-0) at South Gibson (13-2) Girls (6 p.m., Tuesday): When the two met before Christmas, Gibson County played without Micah Hart, who was out with illness, but the Lady Pioneers still won 53-40. Madison Hart had 26 points, 12 rebounds and five blocks, so that is who the South Gibson defense will need to stop. The Lady Hornets are coming off a loss to Huntingdon in the championship game of the Point Guard Coca-Cola Classic.

Bradford (4-7) at Milan (5-5) Boys (7:15 p.m., Thursday): When Milan won the first meeting 46-35 on Dec. 7, it started a five-game winning streak for the Bulldogs. Milan is now on a four-game losing streak entering the week, so a win is important in this one. Bradford returns to action Tuesday before playing this one after two weeks off.

Union City (5-9) at West Carroll (6-2) Boys (7:15 p.m., Thursday): West Carroll suffered a pair of losses in the Martin Lions Club Christmas Tournament by a combined eight points. The War Eagles want to get back to winning as District 12-A play also begins this week. Union City is on a six-game losing streak, but if Malaki Brooks is hot, he is one of the best shooters in the area.

Greenfield (7-5) at Bradford (9-2) Girls (6 p.m., Friday): This game features two players that could be in the conversation for a Class A Miss Basketball finalist spot. Bradford features senior post Rebecca Walter, while Greenfield has senior guard Edie Darby. This is the District 13-A opener for both teams.

Peabody (10-4) at Milan (5-5) Boys (3:15 p.m., Saturday): A slow start in the first meeting doomed the Bulldogs in a 70-54 loss. This time, the game is at home, so the Bulldogs will look for a better start shooting the ball. This is the final game before district play starts for Milan next week. This will be the Golden Tide’s first game since losing two of three games in the Martin Lions Club Christmas Tournament before the new year.