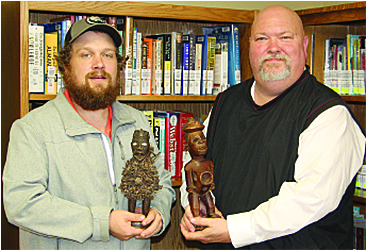 new exhibit is on display at the Humboldt History Museum in downtown Humboldt. The exhibit, with African roots of Hoodoo and its folklore, will run through mid-January.

Museum curator Trey Lynch is thrilled to have the exhibit for people to see. Lynch said to check the museum’s Facebook page for dates and times the exhibit will be available to view.

Tony Kail is a local cultural anthropologist and has spent years and years researching and putting together historical chronicles and artifacts of Hoodoo. Kail said Hoodoo at one time had a strong presence in Shelby County that spread throughout West Tennessee, including Gibson County and Humboldt.

“The basic beginnings came when slaves were brought to Shelby County,” Kail said of how Hoodoo was introduced to the area. “The slaves’ health care was very poor. So typically, there was a healer or someone with knowledge of healing. They knew which roots and plants to use.”

Kail said the healers were called Root Workers and Spiritual Workers, and administered Hoodoo to the people. Another name was conjurors but they were different, according to Kail. Conjurors would do good, but they could also do harm. 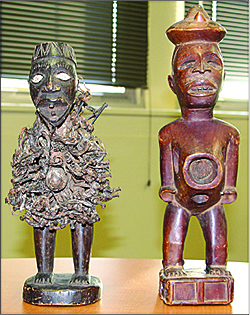 The exhibit will have history of some of those responsible for bringing this healing and African spiritualism to West Tennessee as well as artifacts used in the healing process. There are approximately 100 pieces included in the exhibit.

Through his research, the first finding in Memphis of the use of roots was in the late 1800s. There is evidence that slaves were using tree bark for healing. But it was not until the 1930s and 1940s when it became more prominent in Memphis. At the time, many thought Memphis was becoming a mini New Orleans. Newspaper articles spoke of people stealing babies and Voodoo, which Kail said is very different from Hoodoo.

Even today, Kail said there are versions of Hoodoo still being practiced locally.

There will be a reception soon at the museum, officially opening the exhibit. Kail will be on hand to make a presentation of the history of Hoodoo. The date of the reception has yet been determined but could be the week after Thanksgiving. Check their Facebook page for details.

The Humboldt History Museum’s Hoodoo exhibit is one of many ways to see how African spiritual culture has played a role in molding today’s American culture.

For more information about the exhibit’s dates and times, or to schedule a group showing, call Curator Lynch at 731-618-1406