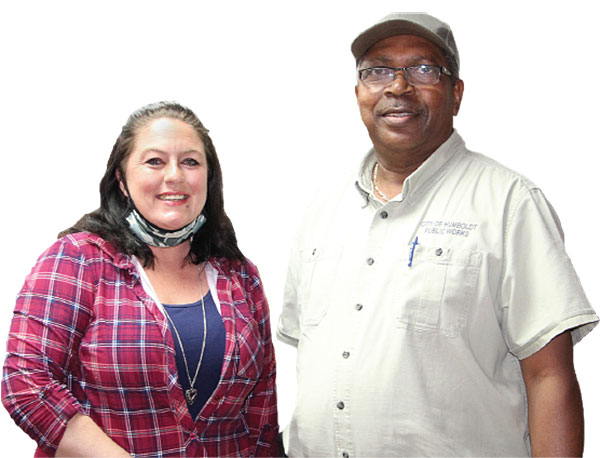 RABIES CONTROL OFFICER – During the Monday, April 26 city board meeting, Sara Russell (left) was hired as the city’s new rabies control officer, often time known as the dogcatcher. Public Works supervisor Willie Reed made the recommendation to the board. Rabies control is part of the public works department.

The city of Humboldt has a new rabies control officer. Sara Russell was hired last week when the Humboldt Board of Mayor and Aldermen unanimously approved the position.

The position had been vacant for several weeks after the previous rabies control officer resigned.

Mayor Marvin Sikes said during the meeting that the city advertised the position in the newspaper and got two applicants. Mayor Sikes said he believes Russell “fits what the board would want” going in the right direction. Sikes noted Russell has several contacts with rescue resources to find homes for the dogs, which keeps them from being euthanized.

Russell attended Monday’s board meeting and said she just adopted a dog with eight puppies. This was music to the board’s ears knowing she would be someone who cares for the dogs that have to be picked up. It was also noted that Russell has some experience in criminal justice so she knows what to expect from the public.

“I think she will do a wonderful job,” Mayor Sikes announced during the meeting.

Board member Leon McNeal said anyone who will adopt a dog and eight puppies must love animals and was all for hiring Russell as the new dogcatcher.

•The board discussed one of the city’s codes pertaining to city stickers. During a previous meeting the board talked about city stickers. McNeal in particular spoke about the city giving citizens a break last year due to COVID.

It was brought up during that meeting to have the chief of police report on the possibility of having the county collect and issue city stickers instead of the police department.

Police Chief Reynard Buchanan presented a report on his findings.

The board was in agreement not to hire the county to collect and issue city stickers.

Alderman Bob Pruett said he does not want to have to drive to Trenton for his city sticker. Plus, the police department (where city stickers are purchased) is open 24/7.

There was discussion of giving one city sticker to every household.

McNeal said the city needs to do something to help out the senior citizens and liked that idea. He wants to give city stickers to all seniors.

Alderman Monte Johnson said he was the one who asked the chief to look into the feasibility of using the county for city stickers. After Johnson looked into it more, he was convinced it is best to keep the system as is with HPD in charge of city stickers.

There was no vote on the matters discussed since the agenda item was for discussion only. 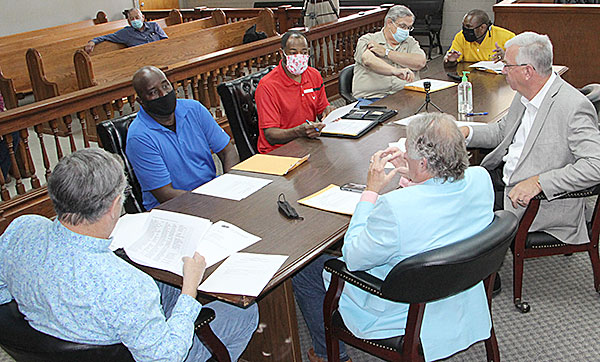 BOARD DISCUSSION – The Humboldt Board of Mayor and Aldermen prepare to begin their meeting last Monday night. The board approved hiring a new rabies control officer, discussed city stickers and heard from a citizen seeking assistance with the historic Booker T. Washington Motel he recently purchased. Board members are (clockwise from lower left) Don Graves, James Shivers, Monte Johnson, Bob Pruett and Leon McNeal, along with Mayor Marvin Sikes and city attorney Randy Camp.

•Elijah Glenn requested to address the board. Glenn said he purchased the Booker T. Washington Motel on Main Street. It is a historical landmark. Glenn told the board that the motel is in the Smithsonian Museum on the third floor in Washington D.C.

He asked the board if the city could help with signage and putting up a historical marker.

“We have something to exhibit to the world,” said Glenn. “It would be a shame if the city board does nothing to take advantage of this historic landmark.”

Mayor Sikes said he appreciates Glenn’s passion and his vision for the historical motel, but when it comes to funding, the board would have to vote and it would need to be budgeted.

Alderman Don Graves asked if Glenn planned to open up the restaurant. Glenn said that is part of his plan but needs assistance.

Alderman Pruett said Glenn could petition the National Register for historic plaque for the building and a marker on the highway.

Funding to get the building in good shape seemed to be Glenn’s biggest hurdle. He said it would take $50,000 for a new roof.

The restaurant was Pulliam’s Barbecue many years ago. Mayor Sikes called Mr. Pulliam an entrepreneur.

Graves agreed and said he was a hard worker. The Pulliam name was famous for his barbecue, he noted.

Mayor Sikes thanked Glenn for trying to preserve a piece of Humboldt history.