The Trenton Light & Water Board has joined a coalition of close to 50 public utilities standing with the Tennessee Valley Authority against “power wheeling,” the process of transmitting power from a producer to a user outside of their service area. 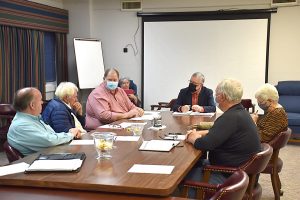 The decision came in response to a complaint filed with the Federal Energy Regulatory Commission by a local electric cooperative and three other utilities against the TVA, requesting that the FERC order the TVA to “provide unbundled transmission service at rates and on terms and conditions that are comparable to those under which TVA provides transmission services to itself and that are not unduly dis

“This thing has turned into something really big,” said Utilities Manager Joe Wamble. “There has been a coalition that has been formed to support TVA. We had several conference calls, and most of the surrounding utilities that had not signed the petition against TVA have tried to support TVA. Trenton Light & Water is one of those utilities.”

Wamble said that the move could have a significant financial impact on TL&W’s customers, but Wam

ble stated that the utility would do everything in its power to protect them.

“Our responsibility is to protect our customers,” Wamble told the board. “If this passes, the way is made clear to wheel power across the valley. Large retailers in Tennessee are probably going to be bid by somebody from outside of TVA. They’ll all go together and buy power cheaper from somewhere else. Whoever has got a utility that’s got a Walmart on their system very well may lose it. If we get two or three industrial plants that go together and say, ‘We’re buying power out of Ohio,’ that’s what we’re trying to keep from happening. I think it’s in the best interest of our customers.”

“We don’t want to get into a situation like they’re in in Texas,” added Board member Frank Gibson.

Wamble later explained that while the idea of being free to shop around for the best utility prices is appealing, power wheeling is risky. If TL&W were to lose a large manufacturing facility that, for instance, paid a $100K utility bill each month, it would cause the cost burden to increase for TL&W’s other customers, all the way down to small businesses and families.

“We would lose that revenue,” Wamble said. “And that’s one customer. People wouldn’t have to shoulder all of that, but it’s a considerable part. There are companies that will come into the valley, cherry-pick the biggest customers, then leave the residential areas and the small businesses that don’t have a lot of load. That’s going to be devastating to the utilities. The cost is going to go up for everybody else.”

“TVA and the utilities that they serve, co-ops and municipals, work on the ‘public power’ model,” Wamble said. “They are service-oriented towards our communities. They’re not a for profit organization. If you have somebody wheeling power in here, it would very likely be a private sector company and they are about one thing. Making money.”

Wamble added that private power companies could potentially raise their customers’ rates higher and higher, or worse, cut their service completely if they felt that the area was no longer profitable.

“You’d have no control over that,” Wamble said. “TVA could raise their rates also, but they’ve signed a contract saying that they won’t for the next 10 years.”

Beyond the costs, there are a number of problems that come with power wheeling.

“There are for-profit Invester Owned Utilities all over the country,” Wamble stated. “What happened in Texas during the winter storms is an example of what can happen with an IOU. They have brown-outs all the time in California. When something happens and they can’t keep up with the demand or their system goes down, the customers are at their mercy.”

Wamble said that TL&W’s relationship with TVA dates back more than 80 years, having partnered with the provider since 1938, and there is more to it than just electricity.

“TVA invests back into the communities. Just a few days ago, TVA gave out a total of $173,000 back into the valley and Peabody got $5,000 of that. They are investing in the community all the time. We could lose that.”

Wamble said that even though the FERC’s ruling could change the way people in Gibson County get their electricity, it won’t happen for some time.

“This will go to court, and FERC will make a decision. Whichever way it decides, the other side is going to appeal,” Wamble said. “We’re looking at five years down the road, at the earliest, before anything will actually happen. But believe me, there are several out there that are watching this lawsuit and, depending on FERC’s ruling, there will be people knocking the doors down to get to our customers.”