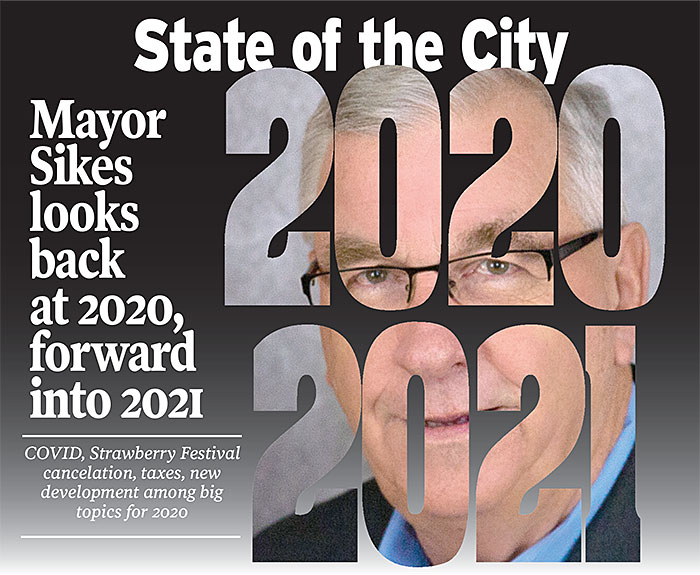 “All I can say is, what a year!” Humboldt Mayor Sikes said as he looked back at 2020. “I’m the first mayor in recent history, maybe in history, to issue two state of emergencies—both due to the pandemic. COVID changed everything we do here.”

Dealing with the COVID crisis definitely tops the list for 2020. First Mayor Sikes dealt with the 100-plus city employees to make sure they were safe. Finding PPE was difficult from the get-go with people buying large quantities to stockpile for themselves. Ultimately, some city employees did test positive for COVID while others were in close contact and had to quarantine.

In March, the mayor closed city hall to visitors and has been closed ever since. People make appointments to pay their taxes or to get building permits. Sikes said they did all the citizens’ business out the back door, literally. This was all done for the safety of the staff and the citizens.

“We had to keep the safety for our staff and provide the necessary services for the city and citizens,” Mayor Sikes said. “Our employees did a great job managing it, masking up and disinfecting. But each department still got hit (with COVID). I worried—what if it wiped out our police department for weeks? That would be awful.”

Luckily, that did not happen.

With city hall closed to the public, Sikes praised his staff for going above and beyond to make sure citizens were taken care of. One hurdle was collecting property taxes. Sikes and his staff were unsure how it would affect collections. It did not. People were very accommodating knowing COVID safety was most important. Most citizens paid their taxes on schedule just like they always had in the past.

Construction and renovations did not slow in 2020 as some might have expected. In fact, over 250 permits were approved and over 500 approved since the summer of 2019.

“There’s been a lot of remodeling and new construction,” Sikes noted. “Permits for building, electric, plumbing—we’re on an upswing both residential and commercial.”

Since property taxes and sales tax drives the city’s budget, the mayor and city board approved a slimmer than usual budget over the summer. There were so many unknowns as to how much funds would come to the city, especially with businesses forced to close during the pandemic back in March. This was another cause of worry for Sikes and the city.

What happens if we can’t make payroll or sustaining services?” Sikes explained. “We had to consider when working on the budget.”

One place to cut the budget was not making any big purchases across the board for all city departments such as new vehicles or other big ticket items. There were a few infrastructure items in the budget such as a new roof on the Main Street fire station.

Even on a tighter than usual budget, city employees were given a small pay raise.

Again, Mayor Sikes was pleasantly surprised that property tax collections were coming in around the normal 92-percent. He was pleased the city was maintaining that number. Perhaps the biggest surprise was sales taxes did not fall nearly as bad as projected.

“Even with COVID, sales taxes are doing well,” said Sikes. “When we got stimulus money, we saw a spike as it flowed in.”

The foresight to create a lean budget and taxes not taking a hit as projected, the city is in good financial shape. But Sikes knows the city, or the world as far as that goes, is not out of the woods with COVID still prevalent.

One good thing that came out of the pandemic is cities received federal stimulus funds, which allowed Mayor Sikes and the board to approve a paving project that was long overdue. Humboldt received around $230,000 in stimulus funds and added over $100,000 from the budget for repaving streets in 2020.

Sikes asked Public Works Director Willie Reed to create a list of streets needing repaving. Sikes made his own list and the two came up with a plan. They created a list of streets, ranked by need.

Last year, almost two miles of city streets were repaved at 20 different locations. That sounds like a lot, and it is, but it only made a dent in the streets on the list. Knowing there would be more repaving needed, Sikes plans on included more funds in next fiscal year’s budget for Phase 2 paving project. He is hopeful of more federal dollars coming down in the future that can go toward this paving project.

Phase 3 of the Downtown Enhancement Project got underway in 2020 and is still ongoing. Phase 3 includes installing all new sidewalks on S. 14th Ave. from Main St. to Penn St. Work began in the spring but shutdown for a stretch. It picked back up in early fall and is now about 75-percent complete.

“Now, new street lights are going up,” Sikes said of the progress. “We’re still waiting for the larger poles to come in. They should be here any day now.”

Other improvements in 2020 were updates at the Municipal Building. Cleaning windows and painting the trim is done. New awnings will be coming soon. The police department is being remodel as well, according to the mayor.

The Stigall Center received a new roof in 2020. This is where afterschool classes and tutoring will begin soon.

Two ditches in Humboldt had upgrades in 2020. S. 17th Ave. near the railroad and N. 9th Ave both had new culverts installed as well as fortifying both sides of the new pipe. Sikes said city workers worked hard cleaning out a lot of the major ditches last year to keep water flowing properly.

Humboldt Utilities, which is under the city of Humboldt umbrella, is in their biggest upgrade project in years. Most of the upgrades are to supply Gibson County Industrial Park where Tyson’s poultry processing plant is nearing completion. Upgrades in the neighborhood of $40-million are being made. Grants and other funding means will provide for a portion of the overall project.

Sikes said the upgrades are mainly for Tyson but also for the expected growth on N. Central Ave.

“We’re working with Amanda Love at the (Humboldt) chamber and Kingsley Brock (Gibson County Economic Development director) to bring in hotels, restaurants, banks, any kind of commerce,” Sikes said. “There are a lot of surprises coming this year.”

Sikes said he could not elaborate on what the surprises are but seemed extremely thrilled as to what might be coming down the road.

But there was a small benefit of not having the festival in 2020, the extra financial burden the festival brings. Sikes noted things such as over time for police, the cost of bringing in other law enforcement for safety reasons, extra work for the Public Works Department, and Park and Recreation Department, all kept costs lower for the city’s budget.

But Sikes said the small savings does not compare to how crushing it was canceling the festival.

Another sad occasion in 2020 was the death of Alderlady Donna Johnson.

“Donna was a very hard-working lady for her district,” Sikes noted. “She lost her battle with cancer but fought it all the way to the end. I thought it was proper to appoint her husband, Monte Johnson, to fill her seat. He’s doing a great job.”

Sikes has a positive outlook for 2021 with several things on the horizon, perhaps none bigger than Tyson’s projected opening date in April.

Another project on the way is the park grant that will provide updates to all the parks in the city. Some of the updates include renovating some restrooms and new playground equipment. The grant will also provide for a new pavilion with stage close to downtown at the corner of Central Ave. and Burrow St. Friends of the Library donated this property to the city.

Mayor Sikes and the city have applied for a CDBG grant to help purchase a fire truck. The grant application is seeking $420,000 to go toward the purchase with the remainder coming from the budget. A ladder truck is on the wish-list but depending on if the city receives the grant and how much, will determine what the city can afford. The amount of funding will determine if the city purchases a new fire truck or used one.

The city has been working on a safety grant that has been approved. Grant fund will go toward upgrades to the intersection of Main St. and Chere Carol. Sikes said this intersection is dangerous. Work will include widening Chere Carol on the west  (residential) side as well as reworking the ditches.

Another project that is currently underway and long overdue is cleaning up the city garage and dog pound property. In the past several months, city workers have removed over 300 abandoned signs and signposts, and stored them at the garage yard. There are old work trucks and part sitting at the garage for years. Sikes said workers are taking one grid at a time. 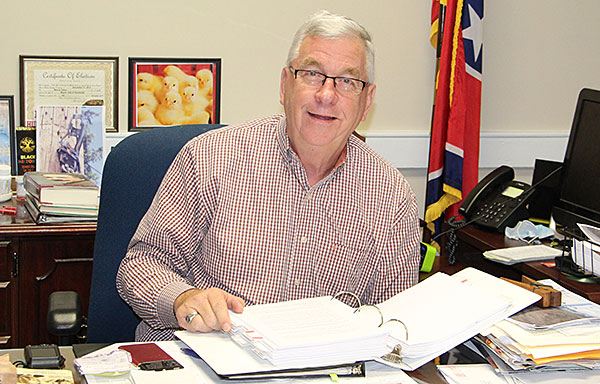 2020, WHAT A YEAR – Humboldt Mayor Marvin Sikes continued a tradition of giving the state of the city report. The address is typically made during Breakfast with the Mayor. It will be a little different this year with COVID and safety measures.