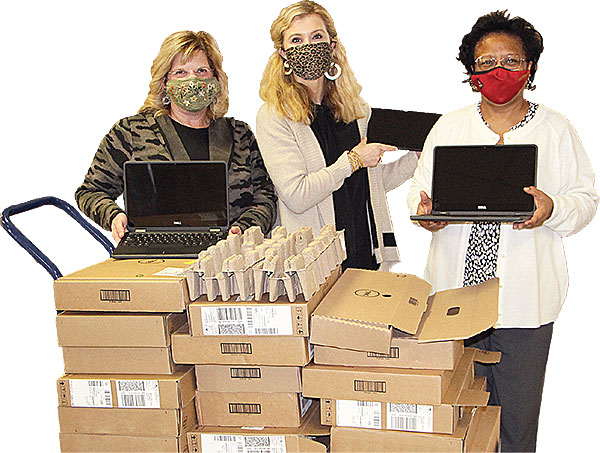 COMPUTERS ARRIVE – After months of waiting, Humboldt City Schools received their first shipment of laptop computers and tablets for students. Interim superintendent, Lillian Shelton (right) is joined by central office staff Michelle Lewis (left) and Jennifer Roten, who played a key role in securing funding through the CARES Act to purchase the devices, which were ordered last summer.

The Tennessee Department of Education announced school districts throughout the state will be receiving funds through ESSER (Emergency and Secondary School Emergency Relief) 2.0 allocations. ESSER is under the CARES Act umbrella. Federal funds totaling $1.1 billion will be distributed by each state, which are then allocated to the school districts.

“Last summer we received $432,000,” interim superintendent Lillian Shelton said of the first round of grant funding, ESSER 1.0. “We were told to multiply what we got last year by four. We thought we would get around $1.6 million.”

But when the Department of Education sent out the allocation list, Humboldt City Schools’ number was $1,974,873.61.
Jennifer Roten, federal programs director for Humboldt City Schools said the dollar amounts for each school district are determined by the census with other factors such as low-income households. Roten noted the specifics of the allocation had yet been released but were expected last Friday.

Once the information is sent from the TDOE, Roten, along with academic coordinator, Michelle Lewis, will begin working on the grant application under the guidance of Shelton.

The school system used the $432,000 to purchase wifi hotspots around Humboldt neighborhood for virtual learning, tablet or laptops for every student, hired another school nurse and a social worker, and purchased PPE (personal protection equipment) and sanitation equipment. With the new round of funding, two more categories will be added that funds may be used—addressing gaps in education for students, and repairs and improvements to the facilities to reduce the risk of contracting or spreading COVID.

The first week in January, the schools receive their first shipment of laptops and tablets that were ordered last summer. They order over 500 devices for students that were age appropriate. The shipment just received was less than 100 but other deliveries keep coming in. Last Tuesday, there were around 150 device delivered for students.

Shelton said with practically every school district utilizing some sort of virtual learning nationwide, the backlog of computer orders was massive and in high demand. She is happy to finally get the devices delivered and getting them ready to put in students’ hands.

When Shelton and her team learned the schools were receiving this large grant, they began putting together a wish list to best use the funds and prioritized by need. The list is still a work in progress. While working on the list, Roten said surveys were sent out to all teachers, asking their first priority needs for students and the class.

“We will look at student needs first,” Shelton noted. “Some of the things on the teacher surveys were on our list too.”

Some of the suggestions included, activities for small group learning, getting readers on level, online academic resources, enhanced technology and to provide teachers and parents with professional develop to meet the needs of students.
Other suggestions were to add more teachers in order to lower the class size, and to seek qualified tutors or perhaps retired teachers. There was also concern over air filtration and how it might spread throughout the school buildings.

Another priority will be used to update Humboldt Jr./Sr. High School. Over the past several years, upgrades to Stigall Primary School and East Elementary School have been made, but no major upgrades have been made at HJSHS. Shelton and her team will do walk-throughs at all three schools to prioritize what needs to be done.

Shelton said the top of her list is student learning loss, and to get them caught up and back on track academically.
Next on her list is to update HJSHS. Shelton said there have been few updates on the 40-plus year old building. She wants new paint and to repair the bridge-way that runs between the main school building and the technology department. The glass enclosure is known to leak.

Third on her list is to get teachers what they need technology-wise, especially with virtual learning. The schools need better wifi, as do the neighborhoods for students learning at home. With all the additional means of virtual learning, internet networks are getting bogged down from streaming live video classes and the shear number of teachers and students logged on at the same time.

Of course all of the items and projects on their wish list are subject to change. Shelton said all the superintendents in Gibson County meet every week and share ideas. She is also on conference and Zoom calls regularly with TDOE and others in the education fields. Shelton said there will be many ideas being shared as to how these funds would best be utilized.

Shelton wants to have parents and others in the community offer suggestions and share their ideas of how to best use the grant funds.

Roten said once the grant is competed and approved, funds have to be obligated within six months. She said the state would heavily monitor the progress and usage of the funds. The schools will have to submit a monthly report. ESSER 2.0 funds must be used by September of 2022.

“If we weren’t getting this money, there’s no way we could do some of these projects,” Shelton said. “We have the opportunity to make some real changes like never before.”