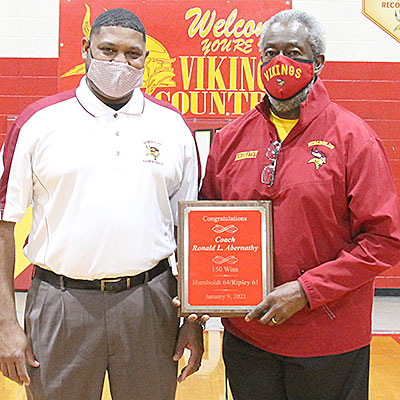 Coach Abernathy has been the head coach at Humboldt High School for seven years.

He also gives credit to a dedicated staff saying, “We’ve have a solid staff and that’s been a key for me because you cannot do it on your own. Coach (Marcus) Butler has been with me the whole time. Coach (Adrian) Ingram has been with me six year and Coach (Steve) Shivers five. In the 150 wins, there have been two trips to the state tournament and four to sub state.” 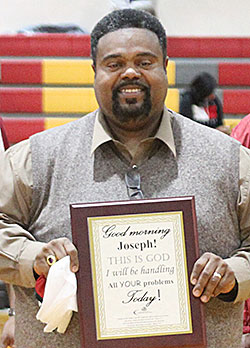 FCA AWARD – Pastor Joseph Montgomery was honored last week as the character coach of the Fellowship of Christian Athletes. Pastor Montgomery was recognized during the Humboldt vs Middleton basketball game last week.

Coach Abernathy could not achieve this award without great players, too many to name but one in particular has a special place in his heart, “I have had some great players and of course my son (R.J.).” R.J. played for Coach Ab all four years of his high school career and was an outstanding Viking basketball player.

Humboldt Jr./Sr. High School reopened the chapter of Fellowship of Christian Athlete (FCA) allowing them to choose a leader in the community that will give our student-athletes the spiritual direction they need. On Friday, January 15, 1 Humboldt administration presented the FCA Character Coach award to Pastor Joseph Montgomery of Higher Ground Assembly Dominion Christian Ministries in Humboldt.