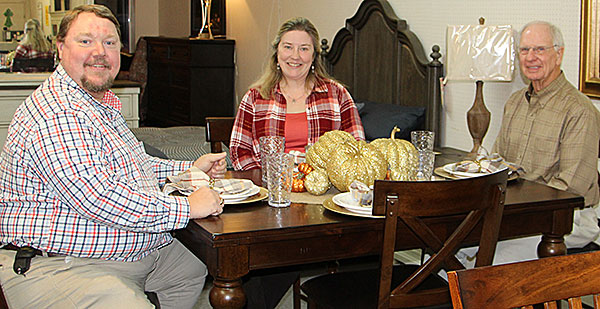 NEW OWNERS – Harry Davidson (right) sits at one of the dining room tables on display at Peoples Furniture in downtown Humboldt. It was announced last week that Davidson had sold the business to Jason and CaRae Tubbs. Their first day as owners was Halloween. The Tubbs say they will continue the legacy of the store by selling quality furniture and providing excellent service. Their new slogan, borrowed from Campbell’s Linoleum & Carpet, “Lookers Welcome, Buyers Adored”.

When Harry and Lyla Dee Davidson announced retirement, they also announced the closing of the family business, Peoples Furniture Company. The downtown furniture store has been a staple business for 70 years.

News of the business closing was a sad day for Humboldt in the early part of 2020. Many asked Davidson if he would sell instead of close. Davidson said he was open to that possibility but wanted to make sure a potential new owner would be a fit for Humboldt.

When COVID hit, the close out of the business slowed. But along the way, a couple of people talked to Davidson about selling, giving hope to keep the business open. Timing was definitely against selling with shutdowns from the pandemic.

But one Humboldt couple was persistent in their quest to buy the business. For Jason and CaRae Tubbs, Halloween of 2020 will always be a memory of a lifetime when they officially purchased Peoples Furniture. They closed on the transaction October 30 and were in the store on October 31 for their first day as owners.

“We started talking around April after Harry announced he was going out of business,” Jason Tubbs said. “We had several conversations to figure out what it would take. We made an offer in June, but it took a while to get it all worked out. We’re so excited.”

Davidson was upfront with the Tubbs of how the pandemic had affected the store, not only with sales, but in the ability to order and received furniture.

“Harry’s not going to let us down,” Tubbs said. “He’s very instrumental in helping us learn the business. Harry said all along he would help us.”

Even with Jason and CaRae as new owners, don’t be surprised if you walk in the store and see Davidson working.
Unfortunately right now, the store’s inventory is down after Davidson had been running his going out of business sale for months.

But with furniture factories shutting down or operating with a limited workforce, it will probably be into 2021 before the shipments arrive. There is an order placed from one company that is expected to be delivered within 60 days. Prior to coronavirus, shipments would typically come in within two to four weeks.

“It’s going to take a little while to build up inventory,” Tubbs explained. “We want the same quality furniture that Harry sold—not cheap furniture. We plan on working with the same companies that will stand behind their product and we’ll offer the same quality service.”

The thought of Peoples Furniture closing weighed heavy on the Tubbs’ hearts. They’ve invested in downtown as co-owners of Humboldt Plaza 3 and did not want to see an empty building across the street.

As much as the Tubbs plan to keep the same business plan Davidson had for decades, there will be some changes.

“I’m looking forward to see what they do with the store,” Davidson said, giving his blessing to change. “In two years, they’ll make the business better. I have no doubt.”

“Our plans are to update the showroom and the front,” CaRae said. “We want to cater to the same people who have used Peoples Furniture for years, but also bring in new customers as well.”

Tubbs, who is a hometown boy, recalled a slogan used years ago by Campbell’s Linoleum and Carpet, “Lookers Welcome, Buyers Adored” and always though it was perfect for any retail business. Tubbs knows the Campbell family and called to see if he could use their slogan for Peoples Furniture. He said the family was happy to let him use it.

For Harry and Lyla Dee Davidson, the family business has been their life for almost 50 years. Peoples Furniture Company first opened on Main Street in December 1940. C.M. Brogden started the company in 1933 in Kennett, Mo. Brogden’s granddaughter, Lyla Dee and her husband, Harry moved to Humboldt in 1973.

Harry started here as a salesman and became manager in 1974 when Norval “Pony” Pyron retired.

“I told him I didn’t know a dresser from a chest,” Davidson told Pyron at the time. “Pony said, ‘you can learn’.”

And learn he did. Davidson quickly grasped the business and became known as an expert in the furniture industry. The Davidson made Humboldt their home and Humboldt welcomed them with open arms.

Now, there’s a new chapter in the life of Peoples Furniture Company with the Davidsons stepping down and the Tubbs stepping in. Even though there is a change in ownership, the Tubbs are determined on keeping the same quality products and service Peoples Furniture has been known for, for decades.