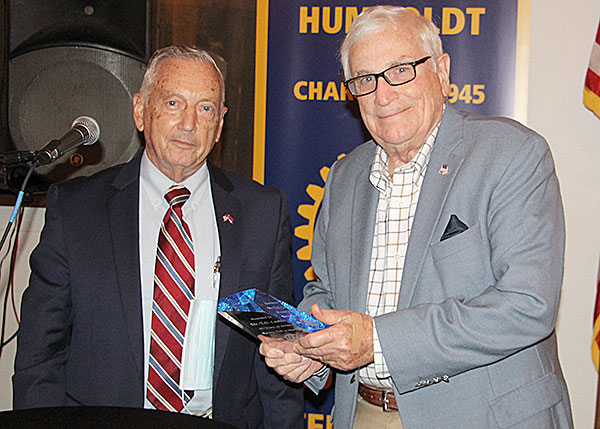 LASHLEE HONORED – During the Rotary Club’s 75th anniversary celebration, T.O. Lashlee (right) was honored as being the club’s longest living member, along with a special tribute to Gus Hicks, who now lives in Arizona. Rotarian Mike Barker had the honor of introducing Lashlee and presenting him with an acrylic plaque.

A Humboldt civic club hit a milestone this month. The Rotary Club of Humboldt celebrated their 75th anniversary last week.
To mark the occasion, members and their spouses/significant others, and special guests met at Crown Winery for the celebration that included dinner, drinks, awards, recognitions and live music.

Club president, Doug Short, along with board members, began planning the event over a year ago, knowing the 75th anniversary was coming. When the coronavirus hit, planning took a back seat with all the unknowns and uncertainties created by the pandemic. But once the country began to open back up and safety guidelines were relaxed, plans continued.

The Humboldt club currently has 65 members and is the largest Rotary Club in Gibson County. It is also the largest civic club in Humboldt. But size does not matter for Humboldt civic clubs who support each other throughout the year.

Last Thursday’s event kicked off with President Short with some brief opening remarks followed by the Pledge of Allegiance. Club member T.O. Lashlee, one of the club’s founding members, offered the invocation before dinner was served. Gourmet Your Way catered the meal.

Members and guests were spread out in the Queen’s Pavilion in order so social distance for safety.

During dinner, Reverend Jessie and the Holy Smokes performed some light background music.

After dinner, Short opened the program by giving history of Rotary. It was very informative as to how the organization first formed in 1905. Three businessmen formed the group and asked other businessmen to attend their meetings to share different aspects of their business. The Rotary name came about from the meetings rotating between the three founders’ businesses. Now there are 1.4 million members world wide in hundreds of countries.

Humboldt Mayor Marvin Sikes, who is also a Humboldt Rotarian, is known to be a historian as well. Sikes offered more historical facts about Rotary International and about the Humboldt club. He said the Humboldt club originally formed in 1909 but disbanded during the Great Depression. Humboldt’s forefathers had the ingenuity to reopen the club’s charter as WWII was coming to a close in 1945.

Next, Lashlee was recognized as the longest tenured club member with 55 years. Rotarian Mike Barker had the honor of recognizing Lashlee for his longevity. Barker said Lashlee graduated from Humboldt High School in 1955, went to UT Knoxville and came home in 1959. As a young businessman working for his father, T.O. “Doc” Lashlee’s company, Lashlee-Rich. Lashlee joined Humboldt Rotary. Lashlee is as active in the club today as he was during the early years. On behalf of the club, Barker presented Lashlee with a plaque, acknowledging his commitment to Rotary. 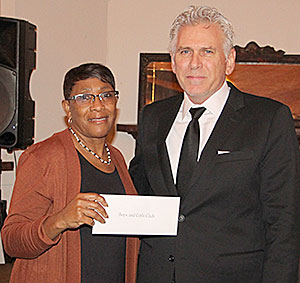 BOYS & GIRLS CLUB – Humboldt Rotarians selected the Boys & Girls Club of Humboldt to be the feature recipient of this year’s donations. The club used an Rotary matching grant of $2,000 and the club’s $2,000 match for a total of $4,000. B&G Director Gladys Robinson (left) accepts the donation presented by President Doug Short.

President Short recognized other notable members who have served the club for 10 years or more. Each of these members received an acrylic plaque customized with their name and the number of years with the Humboldt Rotary Club. Sergeant at Arms Janeice Frisbee announced each member, with Short presenting the plaques.

After members were recognized, the club made donation presentations to five Humboldt organizations. Each donation was for $1,000 except for one. The Boys & Girls Club of Humboldt received $4,000, which was a 50-50 donation with $2,000 funded through a Rotary Grant and the club donated $2,000 to match the grant. B&G Director Gladys Robinson graciously accepted the donation.

After all the accolades and presentations, the band played another set of music while members and guests socialized at a safe distance.

Everyone attending thoroughly enjoyed the program from beginning to end. This was a once in a lifetime celebration for one of Humboldt’s oldest civic clubs.

CELEBRATING 75 YEARS – The Rotary Club of Humboldt celebrated the club’s 75th anniversary last Thursday. The club was originally chartered in 1909 but released the charter during the Great Depression. It was re-chartered in 1945 near the end of WWII. To mark the milestone, the club held a 75th celebration event at Crown Winery for members and guests. During the celebration, the club made donations to five organizations. 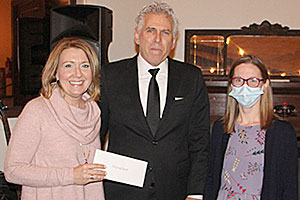 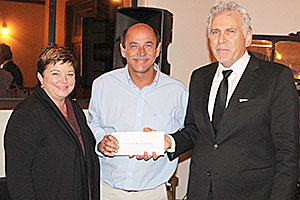 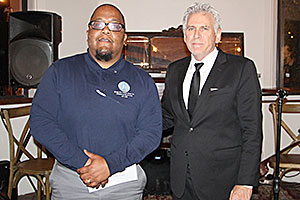 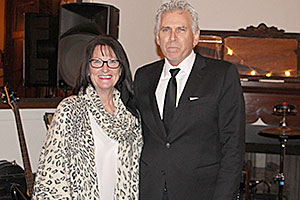 LIBRARY FOUNDATION – On behalf of the Humboldt Public Library Foundation, Elna Blankenship accepts a check for $1,000 from the Rotary Club of Humboldt President Doug Short.