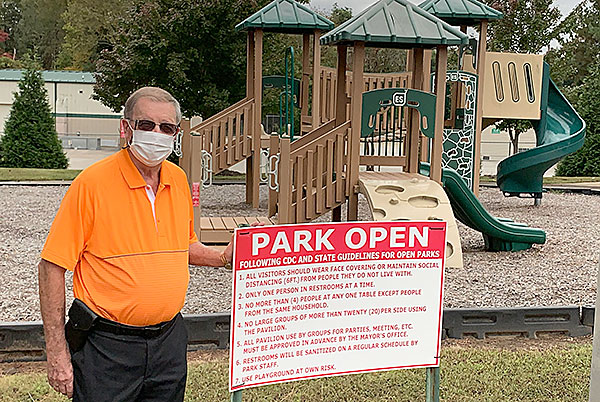 PINE HILL PARK REOPENS – Three Way Mayor Larry Sanders stands beside a sign at Pine Hill Park with new guidelines people should use now that the park’s playground, pavilion and restrooms have been reopened. These had been closed for the past few months due to the coronavirus. The city has resumed accepting reservation rentals for the pavilion but the capacity will be limited to 20 people per side.

When COVID hit Tennessee at a pandemic rate, Governor Bill Lee and Madison County officials were forced to shut down businesses and other areas including parks. Three Way officials had to close Pine Hill Park April 1, 2020.

In May, Mayor Larry Sanders advised the city board that Madison County had opened their parks’ walking trails. Alderlady Mary Ann Tremblay and Alderman Danny Wade discussed what procedures would be needed to open Pine Hill Park’s walking trail. With limited resources, the board agreed to keep the park closed.

That changed during the Three Way Board of Mayor and Aldermen’s October 5 meeting last week after the state and county relaxed some of the mandates dealing with the coronavirus. The mask mandate was eliminated and the sanitizing guidelines became less stringent. Prior to this, restrooms and other surfaces had to be cleaned every two hours and the city did not have the ability to adhere to that schedule.

But with the guidelines modified, Mayor Sanders presented his recommendation guidelines to reopen the park. These guidelines follow CDC’s recommendations such as wearing a mask, cleaning the restrooms two or three times a day, practice social distancing, only four people allowed at a picnic table at a time unless it is a family, having no more than 20 people use a side of the pavilion at a time and having a schedule to clean the playground equipment.

The board agreed to have signs made with these guidelines and locate them at various places in the park for visitors to see.

Signage was put up last Friday afternoon and the park was fully reopened.

In other Three Way business:

•Mayor Sanders presented a quote for Christmas lighting at Pine Hill Park. All Occasion Lighting has installed and maintained the park’s decorations for the past several years. The quote has been the same each year.

The board approved All Occasion Lighting to decorate the park again this year.

All Occasion also sent a quote for Christmas decorations for the new city hall. Much of the lighting in the quote was similar to the park.

But the board was in agreement that the city hall did not need the same or as much holiday decorating as the park. All were in agreement to only have wreaths on the front windows with floodlights for each, and garland around the front door and the railing on the porch.

The board also discussed the city purchase a Christmas tree for the front lobby. Mayor Sanders said it needed to be tall since the city hall’s ceiling is very tall. He suggested a 10 ft. or 12 ft. tree.

•Mayor Sanders presented the city’s long-term street paving schedule. The list showed 14 streets had been repaved since 2016. The list also noted the next five streets in need or resurfacing—Rolling Oaks, the southern end of Sanders Bluff Rd. from the end of the city limits to Hwy 45 Bypass, Creekside, Fesmire Street and Nika Drive.

Alderman Wade noted the city had put $100,000 for paving in the current budget. He asked Mayor Sanders if that would be enough to pave Rolling Oaks. The mayor said he thought it would be.

Rolling Oaks is approximately 1,000 ft. long and 28 ft. wide, which is wider than many of Three Way’s streets.

The mayor said he would not want to pave Sanders Bluff until the new TWRA wetlands park, which is under construction, is completed.

The board agreed to revisit paving next spring.

•Recently, the city had received complaints of speeding on Turner Loop Rd., Sanders Bluff Rd. and other city streets. There were other complaints of vehicles parking on the streets in Willow Ridge subdivision.

The board voted to have MTAS (Municipal Technical Advisory Service) and TTAP (Tennessee Transportation Assistance Program) to perform speed and on-street parking studies. Both organizations are part of the University of Tennessee and provide services to cities at no charge.

Mayor Sanders said there were representatives in the city last week working and gathering data. One representative told Mayor Sanders there was definitely a problem with parking in Willow Ridge with vehicles parked on both sides of the street, leaving only one lane for traffic. It was noted that there would be very little room for emergency vehicles with parking on both sides.

The mayor said once all the data is complete and entered into their system, a report with their suggestions would be created.

•Mayor Sanders told the board that culvert repair project on Sanders Bluff Rd. has been put out for bid. As of last Monday’s meeting, no companies had submitted bids yet but the mayor said he expects to get them in before deadline.

•Exercise equipment for Pine Hill Park has been purchased and is scheduled to be delivered in mid-October. There will be three exercise stations along the walking trail for people to use once installed.

•Mayor Sanders updated the board on having the billboard removed in front of the city hall. The Lamar Sign Company has been notified that the city wants it removed.

In July, Mayor Sanders sent Lamar a letter seeking to have it removed in 90 days. He never received a reply. City attorney Steve Maroney sent another letter to advise them that the 90 days is up and asked for a response with their plans to remove the billboard. There has been no response to the follow-up letter either.

•Mayor Sanders told the board members last month that Joe Faubion, the city’s street/park department supervisor had turn in his notice. Faubion had been with the city for many years and done an excellent job keeping the city streets and the park looking good. Faubion plans to move to Texas where his son and new grandbaby live.

For the past several weeks, Faubion has been training city employee, Jace Seymore, how to operate all the city’s equipment. Seymore has been working for the city for about three months and knows how to operate most of the equipment already.
Mayor Sanders said Seymore is a hard worker and shows up ready to work every day. The city hired Bradley McCord to fill Seymore’s position. Seymore has been promoted to interim level maintenance supervisor.