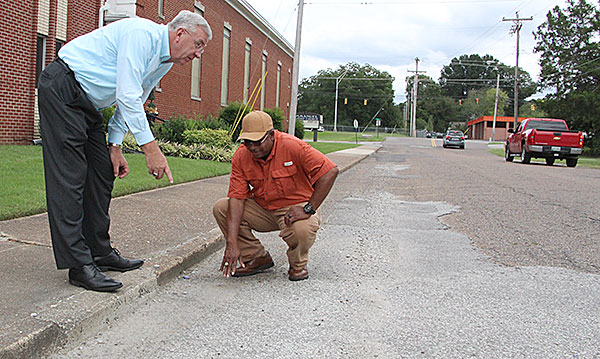 ON THE LIST – Mayor Marvin Sikes (left) and Public Works Director Willie Reed get a close look at Ferrell St. and the bad condition the street is in. This will be one of several streets to be repaved soon. Humboldt received over $210,000 of state stimulus money and will add over $100,000 to bring the total to over $315,000 for paving city streets, which is estimated to pave two miles of streets.

It’s been years, possibly decades since Humboldt streets have been repaved and there’s one reason only—it’s expensive, very expensive. This is the reason Mayor Marvin Sikes has not had paving as a priority.

But when Governor Bill Lee announced Tennessee cities would receive state stimulus money, Mayor Sikes was pleasantly please with the amount Humboldt would received. Recently, Humboldt received the stimulus check for over $210,000.

“You don’t have something like this fall in your lap everyday,” said Mayor Sikes. “I’m always looking for money for paving—there it is.”

Months ago when Sikes learned how much stimulus money Humboldt would receive, he knew right away where the biggest need was. It was also budget time for the city board to approve. The mayor and treasurer Kim Hadley went through the budget, and with cuts here and there over the city departments, an additional $104,000 from the general fund was added to the stimulus money to put the total number at $315,640 toward paving city streets.

The city board approved the budget and was thrill to have enough money for a major paving project.

But, there was a time where the stimulus money was being rethought in Nashville. Some legislators wanted to bank this money with the pandemic looming. Eventually, it was determined to go with the original plan and give it to the cities and counties in the state.

As soon as Mayor Sikes knew he wanted to use this money on paving, he began putting a list together of the streets needing to be paved the most. He also asked Public Works Director Willie Reed to drive the streets and come up with a list of his own, prioritizing them by need. Together, they came up with a final list.

Mayor Sikes talked to professionals and researched how far $315,000 would go and was told it would pave approximately two miles of city streets. This gave him a better idea of which streets would be paved during this phase.

“Phase 1 is the critical list of streets with 20 locations,” Mayor Sikes said of his plan. “We’ll start more paving next year in Phase 2.”

The Phase 2 list of streets and the amount the city can afford is yet to be determined.

“When you’re looking at paving, it’s so expensive,” he noted. “I want to keep our taxes low.”

All the mayors in the county talk on a regular basis, especially with the corona pandemic. During one talk with Trenton Mayor Ricky Jackson, Mayor Sikes told him he planned to use Humboldt’s stimulus money for paving. Jackson told Sikes he was doing the same for Trenton. With paving so expensive, Sikes speculated that many cities across the state will use stimulus money toward paving.

“It’s a blessing this stimulus money showed up,” Sikes said. “We could have used it wherever we wanted. I knew right away I wanted to use it for paving.”