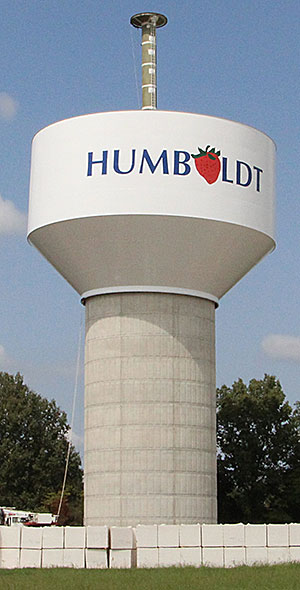 OVER HALF WAY – After about two hours of lifting, the tank is just over half way up the base of the 1.5 million gallon water tower near the Tyson processing plant. When it reaches the top, it will be welded to the base and concrete will be poured for stability and strength. The top (or lid) of the tower will be lifted with a crane and connect to the dome at the top of the huge pipe as well as the side walls of the tank.

One piece of the puzzle to bring in 1,600 jobs to Gibson County is well on its way to completion. The 1.5-million gallon water tower being erected at the Gibson County Industrial Park is projected to be completed and filled with water by December.

For months, construction of the base was underway on the projected 15-month timeline. Last week, the bowl or tank was finished and ready to be hoisted into the air.

According to Humboldt Utilities General Manager Alex Smith, the water tower will be 190 ft. tall. The foundation of the base is 100 ft. into the ground. Smith said the bowl, which was lifted in place last Tuesday, weighs between 400,000 and 500,000 lbs.

Crews perched on top of the base used a hydraulic cabling system to lift the tank in place. Over 20 heavy-duty cables were used to lift the massive structure. Each cable was attached to a lift that would raise the bowl a few inches at a time. After each lift, the crew would coil the cables into rings to keep it out of the way. In all, it took three and a half hours to get the tank in position.

Once in position, concrete was poured onto a rebar grind to reinforce the bottom of the tank at the lip for strength and stability. After that, a metal floor will be installed and then to metal dome top will be installed.

All construction of the water tower is scheduled to be finished any day now.

Landmark Structures was the winning bidder to erect the water tower at $3,365,000. But with additional permits, fees and other expenditures, Smith said the final cost would be in the neighborhood of $3.5-million.

Humboldt Utilities will provide all utility services to the industrial park, including electric, water, wastewater and gas. To give you an idea of how much water the Tyson plant will use, they will use the tower’s entire capacity (1.5-million gallons) per day. Smith said on average,

Humboldt as a whole uses approximately 1-million gallons of water per day.

Smith said the water tower at the Humboldt Industrial Park next to FedEx and the Tyson hatchery has a capacity of 600,000 gallons and is currently the utility company’s largest until the new water tower is operational. Humboldt Utilities’ other two towers near Fort Hill and next to Bongard’s each have a capacity of 200,000 gallons. 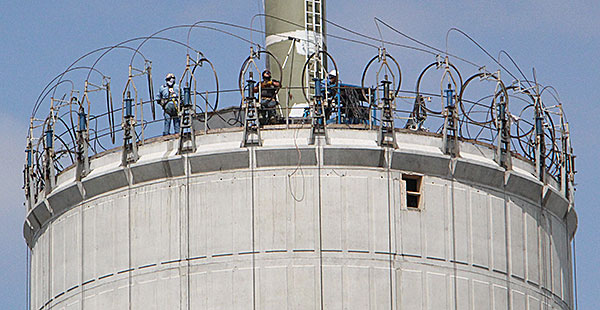 TERRIFIED OF HEIGHTS? – Daredevil type workers plug away hundreds of feet in the air on the top of the base of the water tower going up at the Gibson County Industrial Park. These men use hydraulic lifts and cables to inch the tank up the base. With each lift, the workers coil the cables in rings.

To help supply the new tank, Humboldt Utilities added a fourth well at the water treatment plant. Smith said the well is 200 ft. deep with a 16-inch pipe. It is a little beefier than the other three wells. All combined, the wells will have the capacity to pump 5-million gallons of water per day. The new well is basically finished, Smith noted.

To prepare for Tyson, Humboldt Utilities has already constructed a new electrical substation on the back-side of the industrial park. Last September, workers use a crane to lift and place one of the two mammoth transformers, each weighing 100,000 lbs. at a cost of $800,000 apiece. Smith said each transformer can produce 25 megawatts for a total of 50 megawatts, enough to supply the entire city of Humboldt. Smith said Tyson will use between 17 to 20 megawatts, leaving plenty of capacity for any new growth in the area.

One of the key components of these transformers is Reinhausen tap changers manufactured right here in Humboldt.

A portion of the substation costs was funded through the state’s $4-million Fast Track Grant Humboldt Utilities secured to provide electricity to the industrial park. The substation is operational but is not yet online as new electric lines are still being run to the Tyson plant.

Smith said the utility company’s current system treats 2.6-million gallons of wastewater per day. The new facility will have a 5-million gallon capacity.

The new wastewater treatment plant comes in at a cost of $25-million. The first phase is expected to be completed next March and will be fully completed in December 2021.

In all, Humboldt Utilities is investing $44-million upgrading and overhauling its capabilities to handle the extra load Tyson and future industries will demand. Thanks to state and TVA grants, and other means of funding, a nice chunk of the total costs will be covered. 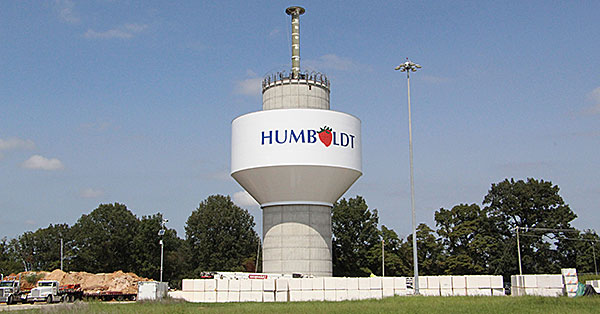 HEADING UP – Workers use a cabling system to lift the bowl of the water tank up the base of the water tower in the Gibson County Industrial Park next to the Tyson processing plant. Over 20 cables are connected to the base of the tank that is hoisted up by hydraulic lifts a few inches at a time.