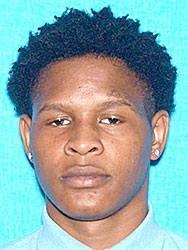 After an investigation into a shooting in Bailey Park, an arrest warrant has been issued. Jaquez Reed has been identified as the shooter and is facing two counts of attempted first degree murder and possess firearm with intent to go armed during a dangerous felony.

According to the warrant, on August 8, 2020, HPD began an investigation into an attempted first degree murder that occurred at Bailey Park in Humboldt. A juvenile victim and an adult victim were sitting in a car waiting to purchase a gun from someone. The adult victim stated that the offender walked up to the car and got in the back seat. The offender immediately pulled out a gun and shot the juvenile victim in the head and then shot the adult victim four times in the torso area.

A witness gave a detailed description of the offender and stated that he had blood on his shoes.

Reed was developed as a suspect and fit the description given by the adult victim. The witness picked Reed out of a photo line-up. Reed had not been taken into custody at press time.