Duvall Drugs closes, Blanton says it’s time for family and to be a grandmother 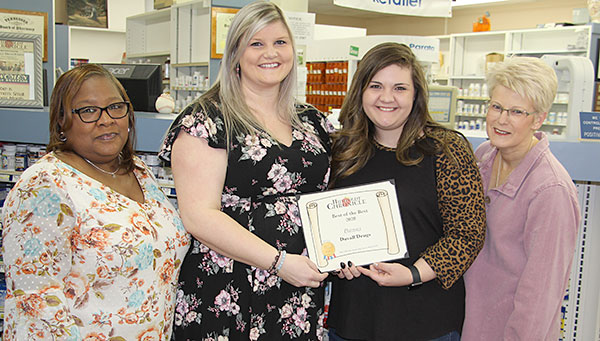 DUVALL DRUGS STAFF – This staff picture of Duvall Drugs from March of this year shows owner/pharmacist Michelle Blanton (right) and long time pharmacy tech Glenda Johnson (left), along with pharmacist Libby Lopez (second from left) and staffer Amanda Frazier. Blanton recently sold the business to Walgreen’s who moved the customer/prescription data base to their Humboldt store on Central Ave.

Wednesday, July 8 was a sad day for Humboldt. That was the final day for Duvall Drugs, as they closed the doors for good.

Even though it seemed to be an abrupt closure, pharmacist/owner Michelle Blanton said she has been attempting to find an independent company to purchase the business. Several factors played into Blanton’s decision to sell.

Perhaps the biggest reason is a new grandbaby in the family. With daughters and sisters living hours away, Blanton and her husband Dave have been looking to move closer to their family. They’ve narrowed their future home to the Winchester, Tenn. area. Blanton’s siblings and daughter live within an hour or so drive from Winchester, between Brentwood, Chattanooga and Alabama. Their plans are to live on a lake. Blanton said

Dave wants to be able to walk out on their dock and fish.

The past couple of years, Blanton said there has been a steady turnover in staff. Over the years, Blanton said the drug store has had many fine people on staff. Two of those were Gloria Bates and Sharon Buchanan who worked for the pharmacy for many years. Glenda Johnson has been onboard since Blanton took over the family business. Blanton said when Pharmacist Libby Lopez came onboard, it took a lot off of her plate but she still had to manage the business. 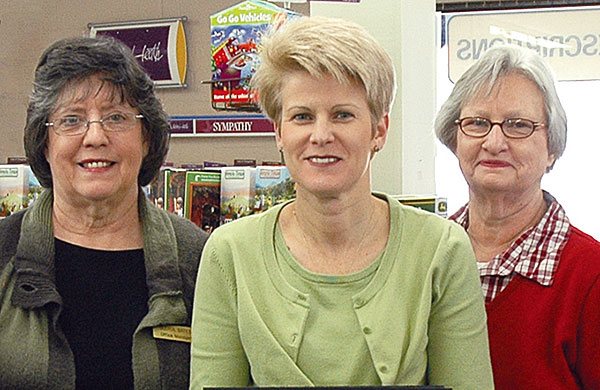 “The last two years, we had a lot of staff turnover, and constantly having to hire and train the new staff,” Blanton noted. “I was struggling—flying without a parachute.”

For years, Walgreen’s has sent out information to buy small independent pharmacies. Blanton was not comfortable selling the family business to a corporation. With the Walgreen’s in Humboldt, Blanton got to know pharmacist there. That, and her daughter working for Walgreen’s, eased her mind and she decided to sell.

“My oldest daughter, Alex (Strain) works for Walgreen’s,” Blanton said. “They are good to her. I like their technology. Brent and Sonya, in Humboldt, are both good people and good pharmacists. I encourage people to give them a try.”

Blanton said the government made it harder and harder for small businesses to survive. This coupled with mail order prescription battle had been going on for many years. Additional fees from insurance and drug companies cut into profit margins. All of these factors influenced Blanton’s decision to sell. It was a hard decision, she admitted. 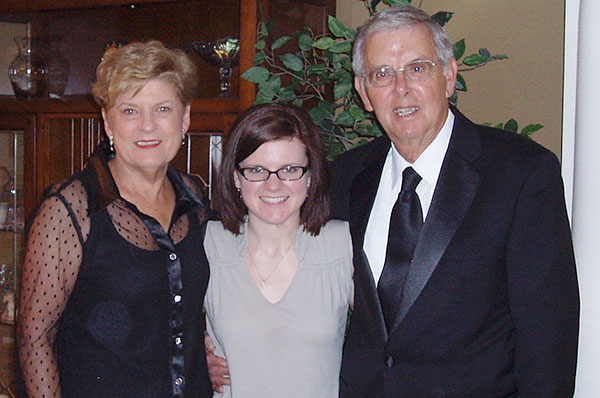 DUVALL FAMILY – The late Bob Duvall (right) first opened Duvall Rexall Drugs in Humboldt over 40 years ago. He is joined by his wife, Jane, and granddaughter Alex Blanton Strain.

The family-owned pharmacy and gift shop had been a mainstay in Humboldt for decades. Bob Duvall first opened Duvall Drugs in June of 1973 when he purchased Langford Drugs from J. W. Langford. The business was then located on 22nd Ave. They have been in located at their current location on Main Street for over 40 years.

Prior to moving to Humboldt, Duvall had worked in hospital pharmacy. He and his wife, Jane, wanted to move closer to home to be near family. Jane is from Jackson.

“It felt like divine guidance from God the way Mr. Langford wanted to sell the pharmacy,” The late Duvall explained of how he purchased the drug store in a 2004 Humboldt Chronicle article when he was named honoree of Christmas in the Park. “This gave us the opportunity to move here.”

“Mr. Langford was sort of like a father to me and grandfather to our kids,” the late Duvall said in 2001 in an article in the Humboldt Chronicle. “We became best friends.”

At the time in 2001, Duvall Drugs was going through a major renovation project of the store. Duvall said they have out grown the amount of space they have now. Once the remodeling is completed, there will be more floor space.

“The business has expanded. It’s getting too crowded in the pharmacy area,” said Duvall in 2001. “The added space will make for a safer environment. We currently have around 650 to 800 square feet of pharmacy space. After the remodeling is completed, we will have almost double that. The floor space for display will be close to the same size but rearranged for better service.”

It was during that time when is daughter, Duvall was so proud to have his oldest daughter, Michelle, working along side him. Michelle and her husband, David, moved back to Humboldt from Richmond, Va., in 1992. She had graduated head of her class from the Medical College of Virginia and was following in her father’s footsteps as a licensed pharmacist.

Duvall began the retirement phase of his life and turned the reins over to Michelle. And Blanton was ready and up for the task. She had already taken over management of the store.

In 2003, Blanton purchased the business from her father and moved Duvall Drugs into a new era when the pharmacy added a pill counter. Blanton said when a pharmacist fills prescriptions for their customers, accuracy is of the utmost importance.

“I had been looking for an automated pill counting machine to increase the speed and efficiency at our pharmacy,” Blanton said shortly after purchasing the pill counter. “The reason I chose this one is its ability to reduce errors and at the same time, save time.”

The pill counter was a great investment and at the time of the store closing, was one of the last models still operating in the state.
Duvall suffered a stroke, which led to other medical complications. He passed away in November of 2016. As expected, this weighed heavy on Blanton and was one of the factors in her decision to sell the business.

“When daddy died, I struggled,” Blanton recalled. “I had to hold it all together. People were coming in saying how sorry they were.”

For Blanton and her family, this was the right time to sell. Dave will continue his engineering career and much of the time he works from home. Having a new grandbaby has a way of putting life into perspective. The Blantons are creating a new chapter in their lives.

“I’ve built relationships for 40 years,” Blanton said of how she will miss their customers, friends and Humboldt. “We’ve had customers who used us for prescriptions for years. It’s hard (leaving).”

“I’ll miss my patients and staff, and miss Humboldt,” said Blanton. “But we need to be with family.”