Board members, audience use social distancing measures for safety

FIRST MEETING – The Three Way Board of Mayor and Aldermen held the very first city board meeting in the brand new city hall on Monday, July 6. Alderman Danny Wade (from left) Mayor Larry Sanders and Alderlady Mary Ann Tremblay practice social distancing at the new board table as well as wearing facemasks, which has been mandated for all of Madison County.

Monday, July 6, 2020 was a day in history for a local community. The city of Three Way Board of Mayor and Aldermen held their first official board meeting in the new city hall. Mayor Larry Sanders, along with aldermen Danny Wade and Mary Ann Tremblay, had been waiting for this day to come for years.

With COVID still an issue, only a handful of people showed up for the first meeting in the city hall. Those who did attend practiced social distancing and everyone in the boardroom wore protective facemasks.

As with all Three Way board meetings, Mayor Sanders opened the floor to the people.

Three Way resident, Franca Young, asked the board if the new city hall would be used as the voting location now that it’s open. Young volunteers as an election official and assists with elections held at the Madison County fire station in Three Way, the same room the city board has used for years now.

Mayor Sanders said it would be up to the Madison County Election Commission whether to move the voting location from the fire station to the city hall. He did say that he was open to allowing the boardroom to be used for elections.

Young’s biggest concern is the size of the room at the fire station and how tight people are during elections. With COVID still on the rise, there could be a safety issue using the fire station.

Three Way resident, Mary Cole, has concerns regarding the drainage ditch near Sanders Bluff Rd. and the Hwy 45W Bypass. She said the ditch is eroding quickly.

Mayor Sanders said he is aware of the erosion. With the ditch so close to the bypass, it might be a question for the Tennessee Department of Transportation as to who is responsible for making repairs. The mayor said he is in contact with TDOT regularly and will bring it to their attention.

In the city’s general business:

•Mayor Sanders had hoped to update the board on speeding problems on Turner Loop Rd. Unfortunately, the mayor had nothing new. He had asked representatives from MTAS and from the sheriff’s department to attend the board meeting to give some options and opinions.

The mayor said MTAS staff are still working from home during the pandemic and hopefully have some information soon. He noted that the local deputy believes speed humps would be the best solution.

•Money the city will receive from the Governor’s Local Government Grant should be in by the end of the month. Mayor Sanders said there have been changes along the way with the grant. At first it was available, then it wasn’t, now it’s available again and without the stipulations for its use.

Legislators in Nashville simplified the grant process to now allow the funds to be spent any way the cities deem fit. Three Way is to receive $67,000 from the grant.

•Last month the board agreed to get quotes for the city hall’s bronze plaque. Lashlee-Rich, the city’s construction manager, quoted a price around $900. The board and mayor thought it would be in the taxpayers’ best interest to get other quotes.

Monday night, the mayor submitted two other quotes and both were considerably higher than Lashlee-Rich’s quote. The board decided to move forward with the plaque from Lashlee-Rich.

Alderlady Tremblay suggested making changes to the design, mainly the size of lines of text. She would like the construction manager and architect’s names smaller, and Mayor Sanders’ name larger. Tremblay said the “2020” seemed hidden and would like it closer to the top, underneath the words “city hall” where it would be more predominant.

Alderman Wade agreed and also suggested having the lower lines of text to be centered rather than flushed left.

•For several weeks now, Pine Hill Park has been closed or partially closed. Mayor Sanders asked the board’s opinion to fully open or stay as is with only the walking trail open to the public.

Everyone agreed to keep things as they are with so much uncertainty due to the coronavirus.

•City attorney Steve Maroney updated the board on drainage issues in Ashberry Farms. He spoke with the Madison County building commission to see what influence he might have on the developers and builders. Maroney was told they have workers out in the field and would keep an eye on progress to assure more drainage issues are not making matters worse.

•Maroney updated the board on action taken in June to join the opioid lawsuit again Purdue Pharma. Last month, Maroney suggested the city file a claim for $5,000.

But after speaking with law firms dealing with big cases such as this, they suggested increasing the claim exponentially to $500,000 in order to be proportionate to others filling the same claim. That said, Maroney said to expect monumentally less.

The reason for such a massive increase is to look at the bigger picture. Maroney said don’t look at it as today—you have to look at it from 2003 with the opioid crises began, up until now, and possibly 20 years down the road. Maroney said opioids are responsible for damages in the $2 trillion range and the lawsuit will be in the billions of dollars.

The board voted to increase their claim as their attorney suggested to $500,000.

•The board discussed the Lamar billboard sign on the city’s property, which now sits in view of the new city hall. Mayor Sanders said the previous administration signed a contract with the sign company but no one can find the contract.

The mayor said he’s contacted Lamar and asked for a copy of the contract but he has yet to receive it. He would like to see the sign removed, especially since revenues have fallen steeply. Previous quarters, the city would receive around $400 but for the past few payments only received $50 per quarter.

Alderlady Tremblay asked if the contract is over, will Lamar move the sign. Maroney said he thinks there should be language in the contract for removal.

Mayor Sanders said if Lamar will not send the contract, then it should be null and void. The board agreed, and voted to terminate the contract and have Lamar move the billboard.

•The board discussed setting a date to hold a ribbon cutting and open house for the new city hall. Alderman Wade suggested holding it on a Saturday mid-morning. Alderlady Tremblay asked if the city would be inviting people. Mayor Sanders said residents would be invited to see their new city hall, plus some dignitaries.

Tremblay said she was not in favor of inviting a large group.

Alderman Wade said current guidelines allow up to 50 people to gather at a time with social distancing being practiced. He thinks there would not be 50 people attending, at least not at the same time.

Wade then asked the opinion of those attending the meeting. Young, who addressed the board earlier, said it might not be the right time especially with the park closed except for the walking trail and then have a crowd at the grand opening. This was food for thought for the board.

The board decided to hold off for now and bring the grand opening back to the board table during the August 3 meeting. 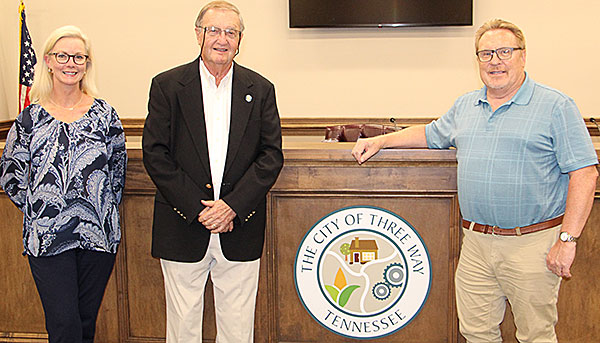 THREE WAY CITY BOARD – Members of the Three Way Board of Mayor and Alderman, (from left) Alderlady Mary Ann Tremblay, Mayor Larry Sanders and Alderman Danny Wade, proudly show off the boardroom in the new city hall. The city hall includes a nice size boardroom on the left side of the building and the mayor’s office on the right side.