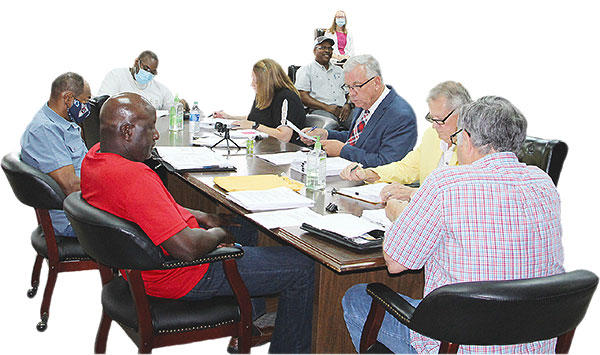 BUDGET APPROVED – Members of the Humboldt Board of Mayor and Alderman mull over the city’s budget for fiscal year 2020-21. The $10.67 million budget includes a 5-percent raise for all employees and keeps the property tax rate the same at $2.7297. Aldermen and staff sitting at the board table are (clockwise from bottom left) James Shivers, Monte Johnson, Leon McNeal, City Clerk Valerie Hayes, Mayor Marvin Sikes, City Attorney Randy Camp and Don Graves. Department heads in the background are Public Works Director Willie Reed and Library Director Brittany Keller.

Humboldt property owners should be pleased that their taxes will not go up this year. Last week, the Humboldt Board of Mayor and Aldermen approved the second reading of the budget ordinance.

The budget includes a 5-percent raise for all employees. Mayor Sikes praised these men and women who are essential workers and noted they deserve the pay increase.

The total revenues are projected to be $10,671,690. Over $1 million of the revenues will be funded through federal grants. Phase III of the downtown renovation come in at just under $700,000 and a safety grant to do work at the corner of Main St. and Chere Carol will be almost $350,000. Grant funding has to be included in the city’s budget.

A big chunk of the city budget goes toward educating Humboldt student with just over $2 million going to Humboldt City Schools.

Another big ticket item in the city’s budget is designated for paving. Humboldt will receive over $200,000 from the state’s stimulus package. Mayor Marvin Sikes and the board agreed to use that money for repaving city streets. Another $100,000 of city funds will be added for a total of $315,639. Mayor Sikes noted repaving city streets is way overdue.

During the public hearing on the city budget held prior to the board meeting, Mayor Sikes cleared up some concerns some people had brought to the mayor’s attention. They referred to an item tagged as “other costs” that showed $3.5 million in spending. The mayor said there are three grants that have to run through the city’s budget that fall into the “other costs” category. 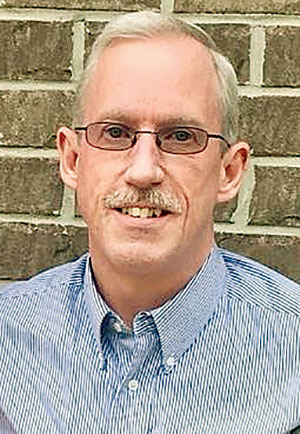 City treasurer Kim Hadley explained what actually goes into the “other costs” category. He also noted that all cities and counties have this item listed in their budgets.

Hadley said anything that is not salaries, overtime or debt service falls into other costs. Of the $10.67 million budget, $3.5 million goes toward salaries, $2 million to the school and a quarter of a million to debt, which leaves a total of $4.8 million in “other costs”, Hadley explained.

Hadley explained the breakdown of the three grants. The Downtown Enhancement Phase III grant is an 80-20 grant. Grant funds 80-percent, plus the city’s 20-percent match, totals $856,000.

The third grant is for airport maintenance and is a 95-5-percent grant totaling $15,750.

Mayor Sikes said this is a tight budget. He asked his department heads to make their budgets lean this coming fiscal year. With COVID affecting the economy, there are still uncertainties that could put a burden on revenues. The mayor praised the city’s department heads for their part in keeping expenditures low as possible.

Mayor Sikes said during the public hearing that Humboldt Utilities’ and Humboldt City Schools’ budgets are part of the city’s budget as well. He held up a stack of papers and announced this was the utility company’s budget. The mayor then held up an empty folder and said it was for the schools’ budget that had not been approved yet.

The city board also approved the second reading of Ordinance 2020-02, amending the city’s 2019-20 fiscal year budget. Mayor Sikes said amendments are not unusual and the city cleans up the current year’s budget. He noted no funds were moved from department to department.
After not meeting for several months due to COVID, the board had months of reports up for approval. They decided to bulk the months together by type of reports and only hold one vote.

Two beer permits were approved during the meeting. Rendell Martin applied for a beer license for carry-out only for Q-Martin located on 711 Front St., formerly known as Stop N Tell. Humboldt Police Department did a background check on Martin with no driving or criminal violations that would prohibit him from eligibility. Assistant Chief Dan Ables’ letter to the board recommended approving the permit.

Also approved for a beer license was for Allison Greer at A Little Bit of Everything located at 2700 East End Drive. Police Chief Reynard Buchanan submitted a letter of recommendation to approve the beer permit.

The final two agenda items were appointments to two boards. Mayor Sikes recommended re-appointment of Tony Carter and Linda Hawks for an additional three years on the Humboldt Public Library Board.

He also recommended Alderman Monte Johnson as the city representative on the planning commission board to fulfill his late wife, Alderlady Donna Johnson’s, term.

All appointments were approved unanimously.