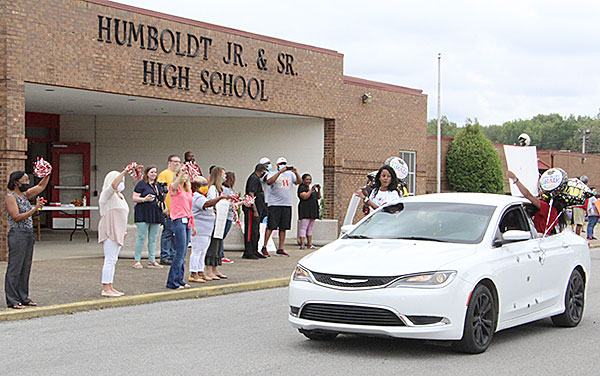 CHEERING ON SENIORS – Director of schools, Dr. Versie Hamlett (left), central office staff and HJSHS staff cheer on Skyy Dickey (left side of car) and other seniors last Thursday during the senior parade. High school seniors were robbed of their final days and weeks of their senior year due to COVID-19 so Humboldt City Schools planned to have a final day send off for all Humboldt students at all three schools.

Last Thursday was the last day of school for Humboldt students—at least that was the plan before the COVID-19 pandemic hit and schools were forced to close their doors. Humboldt educators had given students work assignments and listed websites to help keep learning possibilities available during the shutdown.

PARADE OF CARS – SRO Roy Hudson drives his police SUV as he escorts the seniors and their parents from Jones Dr., onto Viking Drive and into the school parking lot where droves of educators were ready to cheer on the seniors. Thursday would have been the last day of the school year.

Thursday would have been a special day for students and faculty, knowing summer break was here. So the administration came up with a plan to make the would-have-been final day of school indeed a special day after all. They planned to have students ride through the school drives as teachers greeted them along the sidewalks and parking lots.

This was especially fun for the seniors, who missed out on perhaps the best part of the final year of high school.

Seniors met at Viking Park just before noon on Thursday. Some decorated their cars with signs, ribbons and balloons. SRO Roy Hudson, in his police SUV, escorted the parade of vehicles down Viking Drive before pulling into the Humboldt Jr./Sr. High School driveway. There, school administrators, teachers, coaches and other supporters cheered as the seniors made their way through the parking lot in front of the school. 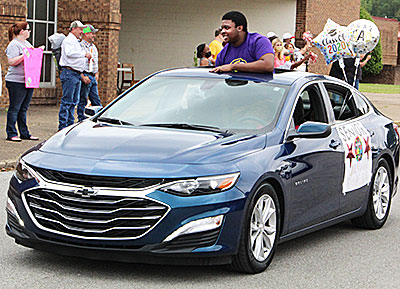 RIDING IN STYLE – Humboldt senior, Jamari Ingram, pops out from the sunroof as he is greeted by a flock of school supporters and staff. Last Thursday would have been the final day of school before the coronavirus pandemic.

Everyone was cheering on the seniors. You could hear, “congratulations”, “best wishes”, “have a great summer”, good luck in college” and plenty of other supportive comments for the seniors taking their final drive through the school they’ve attended for the past four years. There were tears of joy from both the students and parents, and the school staff.

Director of Schools, Dr. Versie Hamlett, was joined by Central Office staff, along with principal Jason Newman and assistant principal Dr. Lindsey Bradford. Everyone at the school made sure this group of seniors ended their high school careers on a high note and not the sadness from the coronavirus robbing them of their final days and weeks as a senior.

But that wasn’t their only stop. As they left HJSHS, the parade of cars continued to East Elementary School, where many of the students spent their earlier years of their education lives. 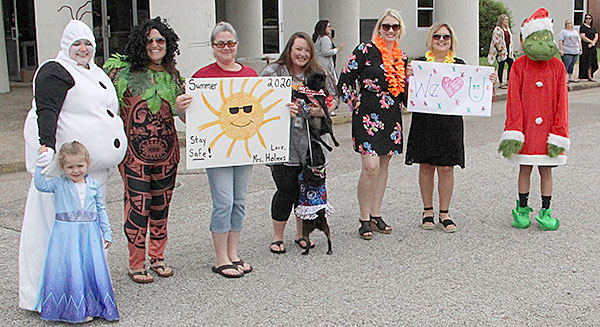 IN CHARACTER – Staff and parents at East Elementary School went all out on the final day of school last Thursday by donning fun character costumes. Parents with their students drove through the school driveway as the staff wished them a great summer.

At East, many of the staff and parents were dressed in costumes to make the event even more fun and memorable. The famous Strawberry Mascot was on hand to wave at the students as they drove by. Principal Brittanie Doaks made sure all the students were receiving a proper send off.

GREETERS – During Thursday’s final day of school celebration, several characters in costume were there to greet the students and parents. The Strawberry mascot, Easter Bunny and a chicken help make the day more fun.The old saying, “When someone gives you lemons, you make lemonade”, was certainly true for this year’s group of Humboldt seniors, students, teachers, administrators, coaches, and parents. Kudos go out to all those who planned, joined forces and spearheaded the day to make sure Humboldt students and their parents know the school staff are behind them 110-percent.

The seniors then trekked across town to Stigall Primary School where their team was waiting as well. Staffers at Stigall were donning themed attire similar to East’s staff. 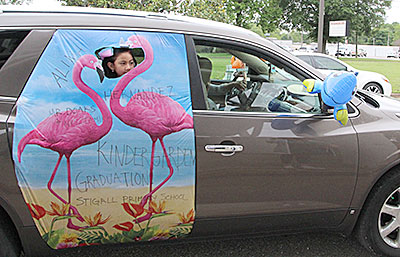 DECORATED CAR – Some of the parents and students driving by their schools decorated their cars with all types of adornments. This vehicle had flamingos with a hole to see through.

They wanted to make sure everyone felt the love and support for the seniors.

But the day wasn’t just for seniors. Underclassmen (and parents) also drove through HJSHS’s driveway where the staff was just as excited to see those juniors, sophomores and freshmen. The cheers, laughter and exuberance were the same for all students.
East and Stigall students paid one final visit to their respective schools on what would have been the last day of the school year.

For this year’s seniors, it will definitely be a year they will never forget. A piece of their senior year was stolen from them and they will never be able to get that back. Thursday was a day meant to at least give them a small piece of the school year back—a final day, a final memory and a final farewell from their Alma Mater.

STIGALL LUAU – Stigall Primary School hosted a Hawaiian luau for students on the final day of school last Thursday. Hula skirts and leis were part of the costumes worn by the Stigall staff and they wished student a happy summer. 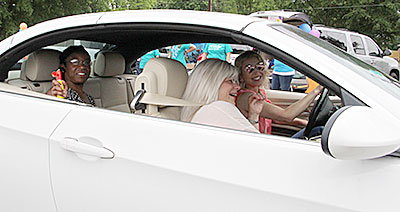 MAKING THE ROUNDS – Dr. Versie Hamlett (in back seat being chauffeured) along with central office staff Michelle Lewis and Jennifer Roten, made the rounds to all three schools last week celebrating with students and staffs what would have been the last day of school.