Moment of silence held for the late Alderlady Donna Johnson

The Humboldt City Board met Monday, May 11 with limited attendees. The meeting was broadcasted live on local radio station, Good News 99.9 FM – 1190 AM. The video is also available on the station’s Facebook page.

To begin the meeting, the board took a moment of silence in honor and to remember the late Donna Johnson. Alderlady Johnson passed away recently and was a respected member of Humboldt.

With only four board members after Johnson’s passing, three members are needed to have a quorum. That’s how many attended the meeting. Alderman James Shivers was unable to attend the meeting. 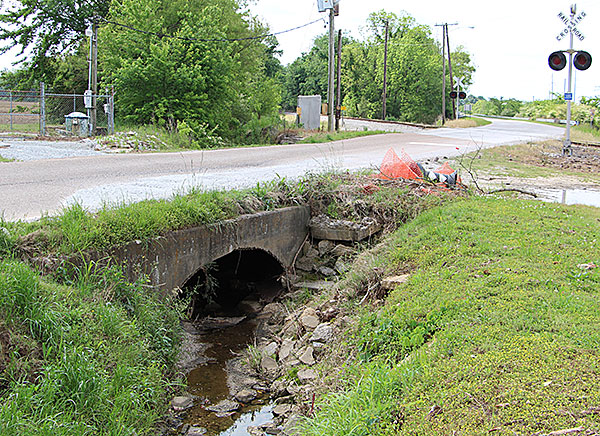 CULVERT REPAIR – This culvert on S. 17th is one of two set to be repaired. Both have been on Mayor Marvin Sikes’ radar of projects to do. He thought the city would receive FEMA funding but that fell through.

The board’s first item of new business was to approve bids to replace two culverts, one on S. 17th Ave. and the other on N. 9th Ave.

Four bids were submitted with Delta Constructing Company having the low bid of $174,000. ENSCOR, Thomson & Thomson, and Milan Environmental Contractors also bid the project with prices ranging from $177,716 to $275,000.

Mayor Marvin Sikes said the culvert on S. 17th was completely blown out a couple of years ago during a major storm. The same happened to the N. 9th culvert as well. Sikes noted the city had been working on this project for a couple of years now.

“We thought we had it paid for by FEMA,” Sikes told the board. “But FEMA just dumped us. We’re going to pay for it ourselves.”
Alderman Don Graves asked if the S. 17th culvert would fix the problems with flooding, noting a gentlemen living in that area has approached the board seeking assistance to stop the flooding.

The mayor said it would not help with flooding; instead, the bid was just to repair the culvert. It could alleviate some but probably not, Sikes added. Sikes noted the culvert was probably installed in the 1930s.

City engineer, Terry Drumwright, said the culvert might be slightly bigger but not enough to make very much difference in the amount of water flow.
The board unanimously approved the bid from Delta. Drumwright estimated the work should begin by the end of May and be completed in June.

•Resolution 2020-03 was brought to the board table, requesting almost $211,000 for road projects through the Governor’s Local Government Support Grants.  Governor Bill Lee put money in the state’s stimulus package and designated how much each city and county would receive.

Mayor Sikes explained that the resolution would approve submitting an application to the state, requesting the funds.

Alderman Bob Pruett asked if the money was for road projects.

“We don’t get $210,000 very often and I’d like to look at paving,” Sikes said, with board approval. “I’ve already started a list of the worst ones (city streets).”
Sikes is getting estimates to see how much it would cost for each road on his list.

Graves asked if the city planned on adding money to the grant money in order to pave more streets.

The mayor said he would like to add another $100,000 from the city but that depends on what the budget will allow.

•The board voted to turn the 2018 real and 2019 personal property taxes over to the court for collection.

First, K-9 officer Jonathan Stewart submitted his resignation from the police department. In Stewart’s resignation letter to Police Chief Reynard Buchanan and Assistant Chief Dan Ables, Stewart thanked the city and police department for hiring him and for his time with the force. Stewart offered to assist in training his replacement as the K-9 officer.

Graves asked the reason for Stewart’s resignation to which Mayor Sikes replied that it had nothing to do with the police department but instead personal family issues. Sikes said Stewart was a fine officer and will be missed.

The next police discussion was hiring a full time dispatcher and two police officers.

Buchanan also recommended hiring Seth Shewmaker and Michael Santiago to the police force. In his letters of recommendation, the chief stated both men had passed a police exam, physical agility tests, medical exam, drug screening, psychological evaluation and both meet all the requirements of Tennessee law for eligibility.

Shewmaker is a citizen of Humboldt and references described him as a hard worker and friendly.

Santiago is an honorably discharged veteran whose primary specialty was military police and served in Iraq.

All three were unanimously approved for hire. Graves’ first day on the job was Wednesday. Santiago and Shewmaker are to begin next week.