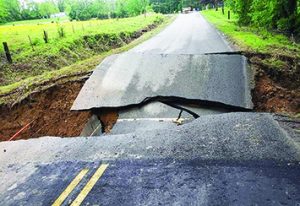 Heavy rains Monday night washed out a section of Narrow Gauge Road in Trenton, closing it until the city street department can make the necessary repairs.

“It just gave way,” said Trenton Mayor Ricky Jackson, who lives nearby. “It was pretty rough. When you get two-and-half inches of rain in 30 minutes, you’re going to have some damage.”

Jackson said the washed-out area was about eight to 10 feet from being in the county, meaning the city is responsible for fixing it. The city has purchased a culvert from the county.

Jackson said the city has the equipment needed to make the repairs, which include digging out the old culvert and installing a new one and putting gravel on the road to settle until the street can be blacktopped.

The street department plans to begin the work Wednesday morning to get the road reopened as soon as possible, Jackson said.

Photos are courtesy of Jennifer Gage.