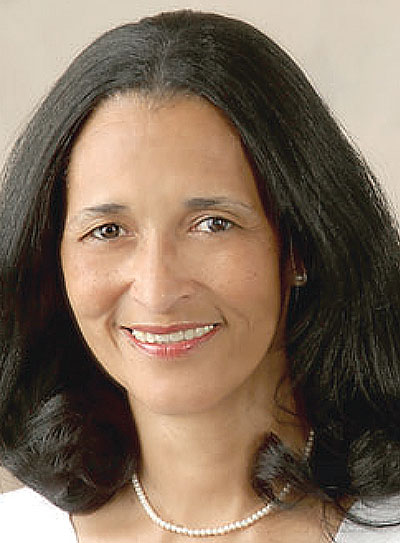 A Humboldt icon has left us and gone to be with her Savior. Donna Johnson passed away Monday, April 20 after battling cancer for several years. A private graveside service for immediate family was held Friday, April 24 at 1 p.m. in Rose Hill Cemetery, due to COVID-19 pandemic.

Johnson made history as the first African American woman elected to the Humboldt Board of Mayor and Aldermen in 2013. She narrowly defeated incumbent alderman, Herman Newell, by two votes.

Johnson served Ward 5 for four years and was re-elected to a second term in 2017 where she ran unopposed. She was still serving her term at the time of her death.

“Donna was a wonderful public servant who cared about her district and all the people of Humboldt,” Mayor Marvin Sikes said. “She fought cancer, unknowingly to some folks, but she never gave up. Now she’s reaping her reward with the Lord.”

Johnson was born, raised and educated in Humboldt.  She earned her associates degree from Dyersburg State Community College. Her work career includes a dispatcher for the Humboldt Police Department, Walmart associate and a realtor.

“I have a stick-to-it attitude that is needed at this time in our city; a time when the residents of our city are leaving for safer streets; a time when we need to attract jobs to our city because unemployment is high and jobs are few; a time when people are leaving our city for better educational systems,” Johnson said when she was campaigning in 2013. “It takes all of us working together to make the necessary changes to bring the city of Humboldt back to its glory days.” 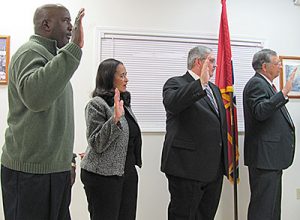 BOARD TAKES OATH – This file photo from New Year’s Day of 2014 shows four new city board members being sworn into office, the late Donna Johnson (second from left) being one. Johnson passed away last week, still serving in her second term as alderman for the city of Humboldt. Other’s taking the oath in 2014 are (from left) James Shivers, (Johnson), Bob Pruett and Don Graves.

Johnson lived by those words as a city leader. Often times, Johnson was referred to as the glue that holds the city board together.
In 2017 as she was seeking re-election, Johnson was battling cancer. But she persevered and stayed strong, not only body and soul, but to her word to the citizens of Humboldt as an alderlady.

“While doing my Chemo treatment, I was not able to communicate or make myself visible as much as I would have liked, but I assure you that my heart and love for our citizens and Humboldt didn’t stop,” Alderlady Johnson said during her re-election bid in 2017.
“The last four years have been filled with more progress than ever before. I believe our neighborhood is more united. Do we still have work to do? Is there still room for growth and improvement? The answer is ‘yes’, but we can make this happen by being stronger together. You deserve to have your phone calls returned and your e-mails answered promptly so that you know that we are doing our best to address your concern. I am asking you, our citizens, not to give up on your concerns or Humboldt! We are not perfect, but we continue to strive for perfection!”

During Johnson’s tenure, she points to the progress the mayor and board of aldermen have produced in three and a half years. There has been considerable progress in cleaning up the city, upgrades to the parks and city, and addressing abandoned property.  Adult crime has decreased by 60-percent and juvenile arrest by 500-percent in five years per data from the TBI, Johnson noted in her announcement as a candidate for re-election in 2017. 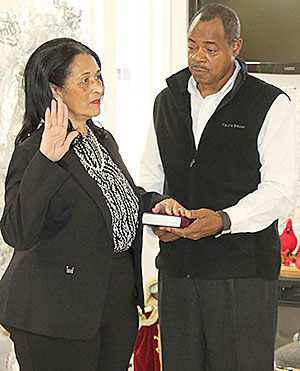 SWORN IN – Alderlady Donna Johnson takes the oath of office in January 2018 after winning her re-election bid in 2017. Her husband, Monte, holds the Bible during the ceremony.

“She’s a good Christian woman who will truly be missed,” Mayor Sikes said. “Her caring for Humboldt was unbelievable. She treated everyone fairly.”

With the vacant seat on the city board, Mayor Sikes said he will recommend her husband, Monte, fill her position, with board approval. Sikes said he spoke with Monte about filling his wife’s seat at the board table. He told the mayor that he would be honored to do it.

Alderlady Johnson also served on the Humboldt Planning Board and Humboldt Utilities Board of Directors. Both positions will need to be filled.